James Garner started his youth career at Manchester United and has represented the club at different age levels. He is regarded as one of the best youngsters to come out of the academy. The midfielder is currently on loan at Nottingham Forest in the EFL Championship. Manchester United’s constant struggles have urged them to buy players that could boost their chances of more trophies. The Red Devils are looking for a midfielder who could dominate the midfield. James Garner’s recent performances have given the English Premier League side more options in the midfield for next season. He is getting praise from some of the club legends and could become a part of the first team for next season. 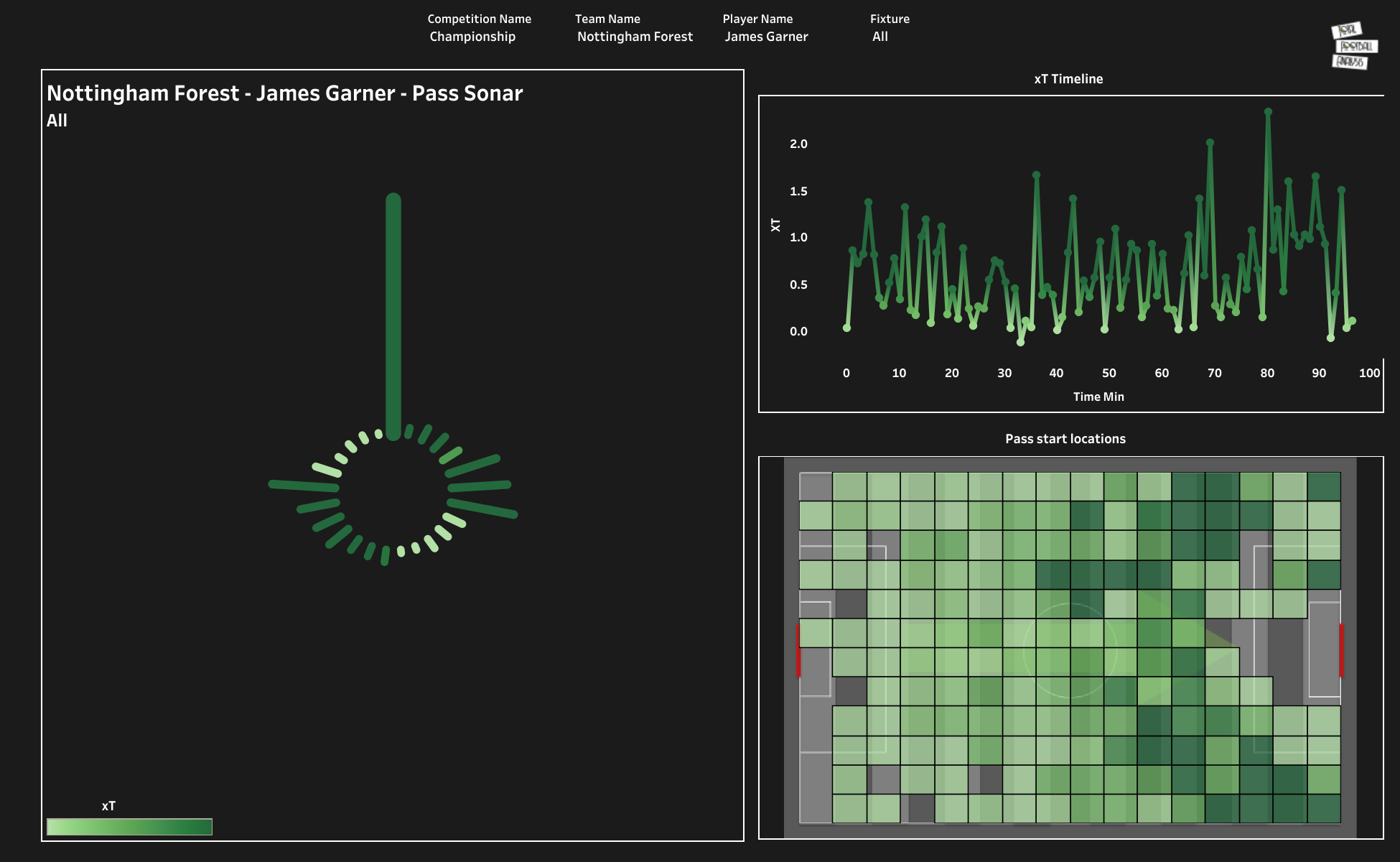 James Garner has been a regular part of Nottingham Forest in the EFL Championship and has made 31 appearances. The 21-year-old has found the back of the net three times and has provided four assists. The above viz shows the pass start location as well as the expected threat timeline from passes. By looking at the pass start location, we can observe that Garner likes to go wide on both sides and attempt passes into the opposition’s penalty box. He is not a huge crosser of the ball and has only attempted 31 crosses into the opposition’s penalty box. From the xT timeline, it can be noticed that he has created more threats in the second half in comparison to the first. 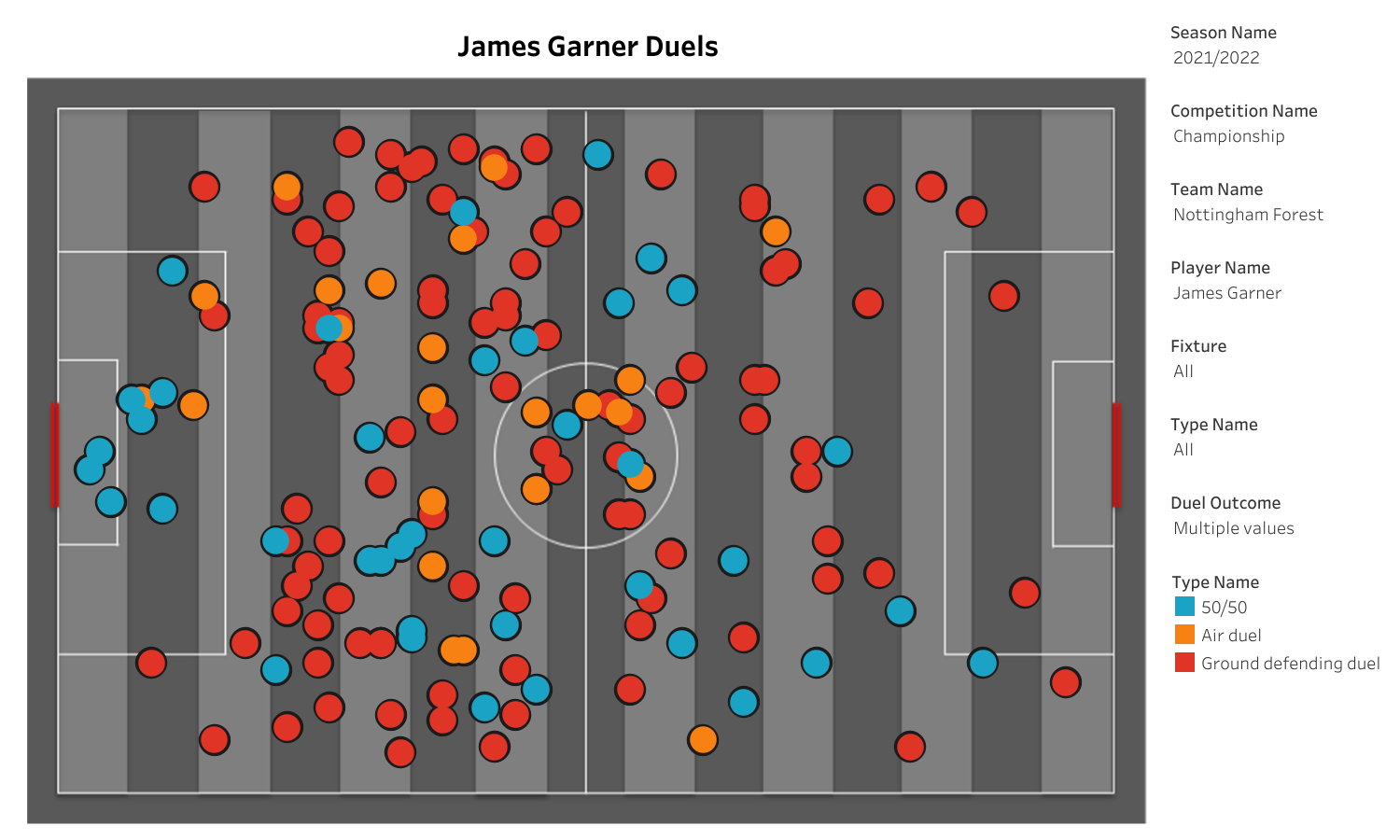 The midfielder is not afraid of contesting duels on the pitch. The above viz shows all the duels that James Garner has won or where the duels have ended in a neutral result. Most of the duels contested by the player have been ground-level defensive duels. He has contested these duels in the middle of the park as well as within the opposition’s half. Garner has also contested a few loose balls or 50-50 duels, some of them inside his team’s penalty box. The player is not shy of making one or two tackles and has shown dominance in the midfield. 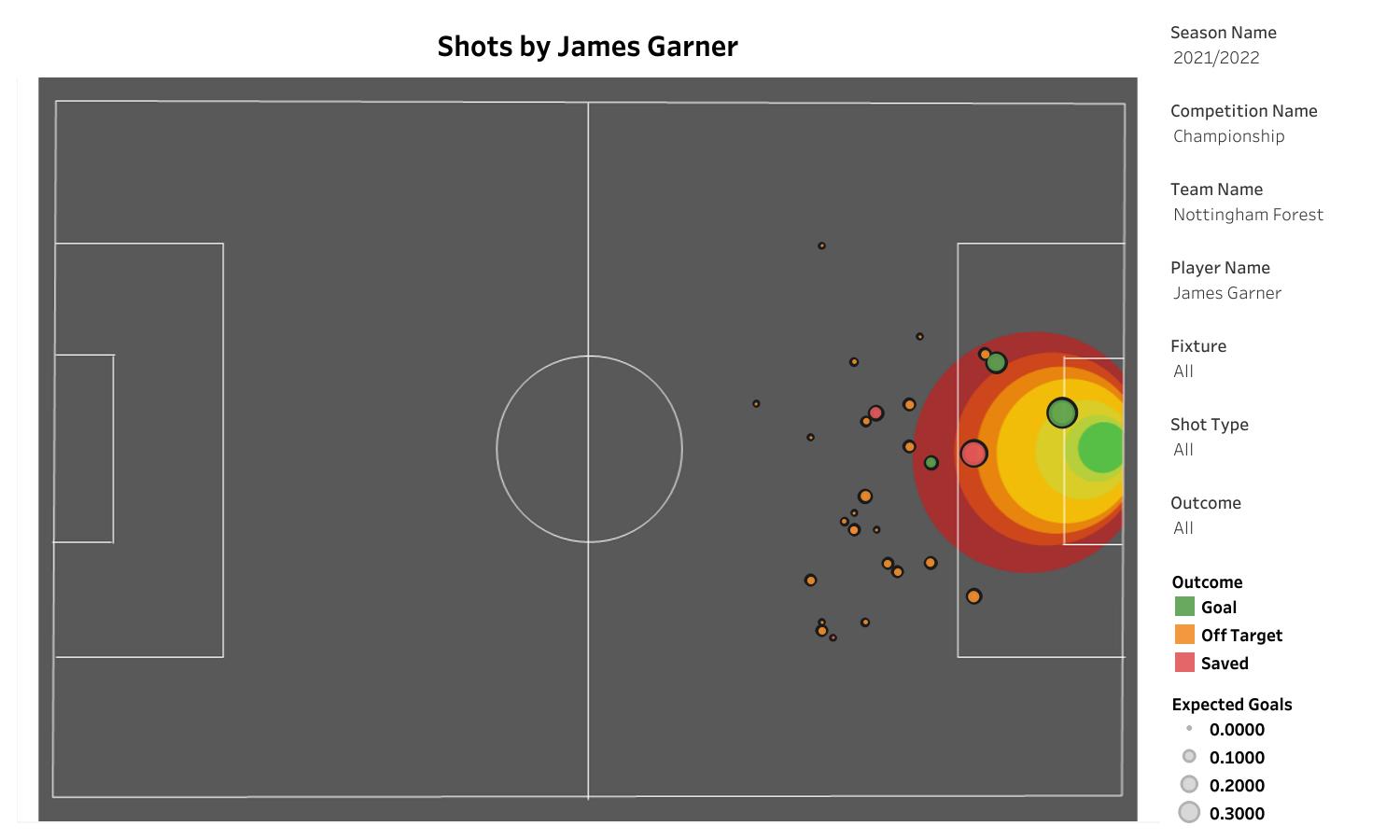 The midfielder is also not shy of attempting a shot or few from long range. He has scored three goals with an xG rate of 2.18. Two goals have been scored from inside the opposition’s penalty box and one from the edge of the box. The above map shows all the 29 shots attempted by the player. Of these 29 shots, seven were on target. Garner has only attempted five shots from inside the penalty box, and the rest of the shots have been attempted from outside the box.

James Garner is getting enough game time in the lower division and has shown a lot of potential. He gave an impressive performance when Forest lost to Liverpool in the FA Cup, and this earned him a lot of praise from some of the club legends. The midfielder has led Manchester United’s youth side previously and could save a lot of money for the English Premier League side. He has already made his debut for the Red Devils and will be looking for more game time for the Premier League side.