Manchester United will look to return to winning ways when they host Tottenham Hotspur at Old Trafford in the English Premier League. Both teams are fighting for a top-four finish in the league, with the Spurs being two points behind the hosts, having two games in hand over their weekend opponent. The Red Devils suffered a humiliating 1-4 loss against rivals Manchester City in the last round. Tottenham Hotspur, on the other hand, earned a thumping 5-0 victory over Everton. Manchester United, however, won the reverse fixture comfortably by 3-0 at the Tottenham Hotspur Stadium. 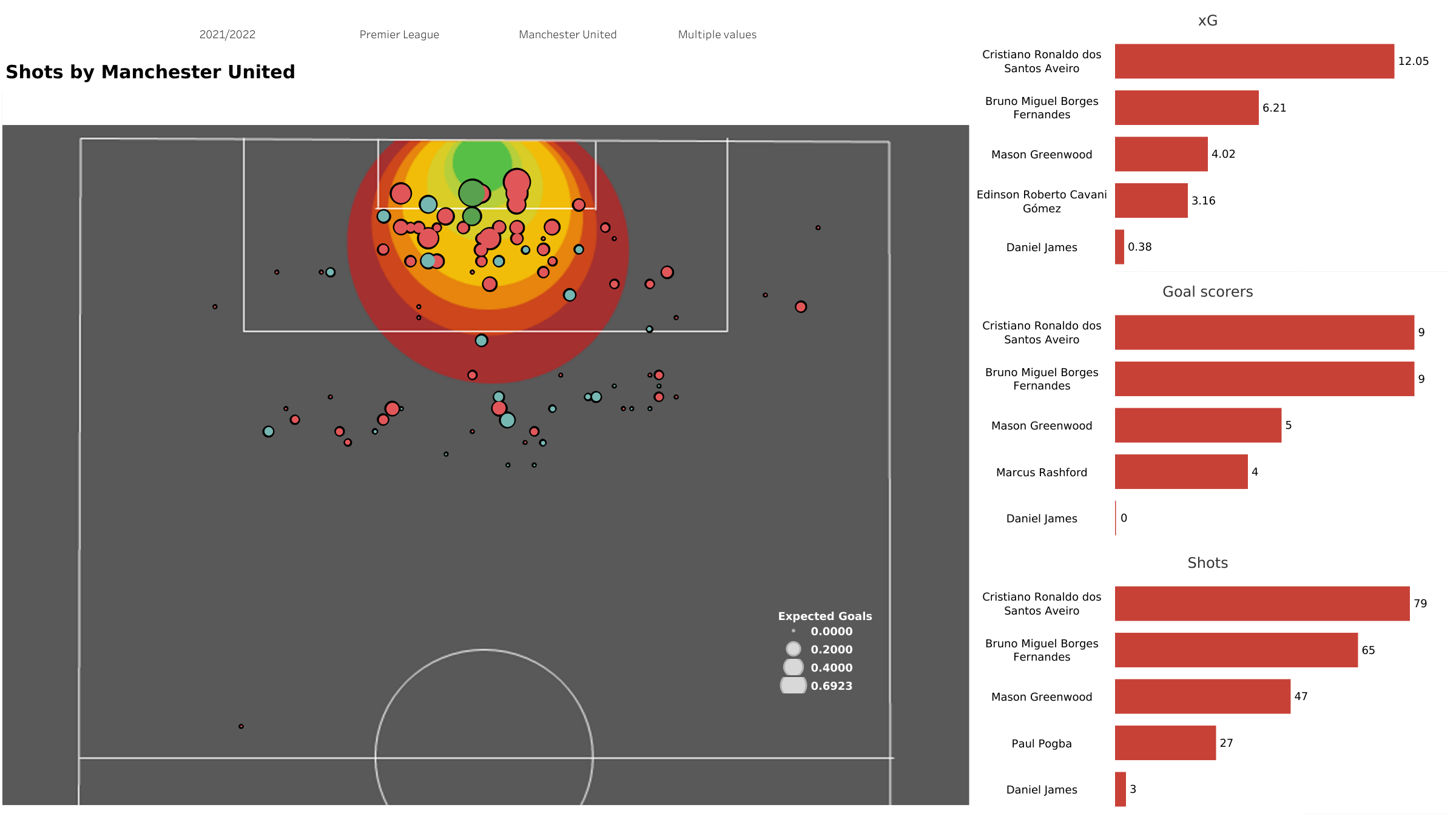 The Red Devils have attempted 388 shots, and 133 have been on target. Of these 388 shots, 231 have been attempted from inside the opposition’s penalty box. Ralf Rangnick’s men have managed to hit the target on 93 occasions from inside the penalty box. The above shot map shows the shots attempted from free-kicks, corners, and free-kick crosses. Manchester United have only scored two goals from set-pieces and have been unable to create much threat.

Tottenham Hotspur have won 14 out of the 26 games played this season and have suffered defeat on nine occasions. Antonio Conte’s men have scored 40 goals and conceded 32. The xG rate of the Spurs this season is 39.87, with an average of 1.42 xG per 90 minutes. From the above viz, we can observe that Spurs are only behind Liverpool in hitting the target from outside the opposition’s penalty box. They attempted 121 shots and managed to hit the target on 46 occasions.

The Spurs have attempted 307 shots this season and averaged around 11 shots per 90 minutes. They have managed to hit the target 136 times and have the third-best shots on target per 90 minutes. Tottenham Hotspur have also failed to score enough goals from set-pieces like their opponents. Conte’s men have scored one more goal than Manchester United.

Sergio Reguilon is expected to start in the left-back position, after Ryan Sessegnon got injured in the last match. Matt Doherty is also expected to keep his place in the right-back position ahead of Emerson Royal.

Manchester United are in desperate need of a win when they take on Spurs. Spurs have the momentum going into this game and will look to earn back-to-back victories in the league.