Buy Football Manager 2023 through our friends at Fanatical and get 30% off by using the code FM23DAILY.

In recent years, Football Manager has only gotten more realistic. The level of detail that goes into the game’s mechanism is fascinating, and it is a huge reason why being successful in the game is so rewarding. Sports Interactive always make sure the FM tactical experience is as authentic and updated as possible. This includes staying up to date with tactical trends and the “real-life meta” if you want to call it that.

After the FIFA World Cup, many are calling Morocco’s run the spark of a tactical revolution, especially for their success without dominating possession. Of course, the African nation is an extreme example, but more examples can also be found in the big nations. Both finalists, Argentina and France, often resorted to a different defensive approach to what has dominated football in recent years. The overall trend has seen teams adopt a more passive defensive approach without the ball, exchanging the intense high press, which has dominated football in recent years, for an impenetrable mid-block.

I have found myself resorting to a similar approach in FM23, not at all by choice. I wasn’t sure if it was something I was doing wrong, or what was going on, but I could not get a sustainable high press to work in any of my saves. After watching some videos and reading some conversations from the community, I decided it was time to change my approach. In this article, with my Man United save, I will explore why high-blocks are often not working in this year’s FM, and how to deploy an effective mid-block instead.

In the last editions of FM, I have consistently opted for a high block without much hesitation. It was common knowledge that lowering your block, even in smaller clubs, would attract unbearable pressure and eventually failure. Most of the popular tactics in the community also consistently adopted a high block with the goal of pressing the opponent high in their half. FM23 received a complete revamp in the defensive tactics department, with far more options to choose from without the ball. This obviously made the whole defensive dynamics of the game much more complex.

In the first few weeks of the game, these were the usual options I went for out of possession. I adopted a high press with a much higher defensive line, looking to compact the pitch and overwhelm the opposition. With a similar thought, I instructed my defensive line to step up more in order to immediately close down any possible attempts to play up the pitch. The option to prevent short distribution was not necessary, although I used it at times. Pressing trap and cross engagement were left on a match-by-match basis, depending on the opponent and their style. 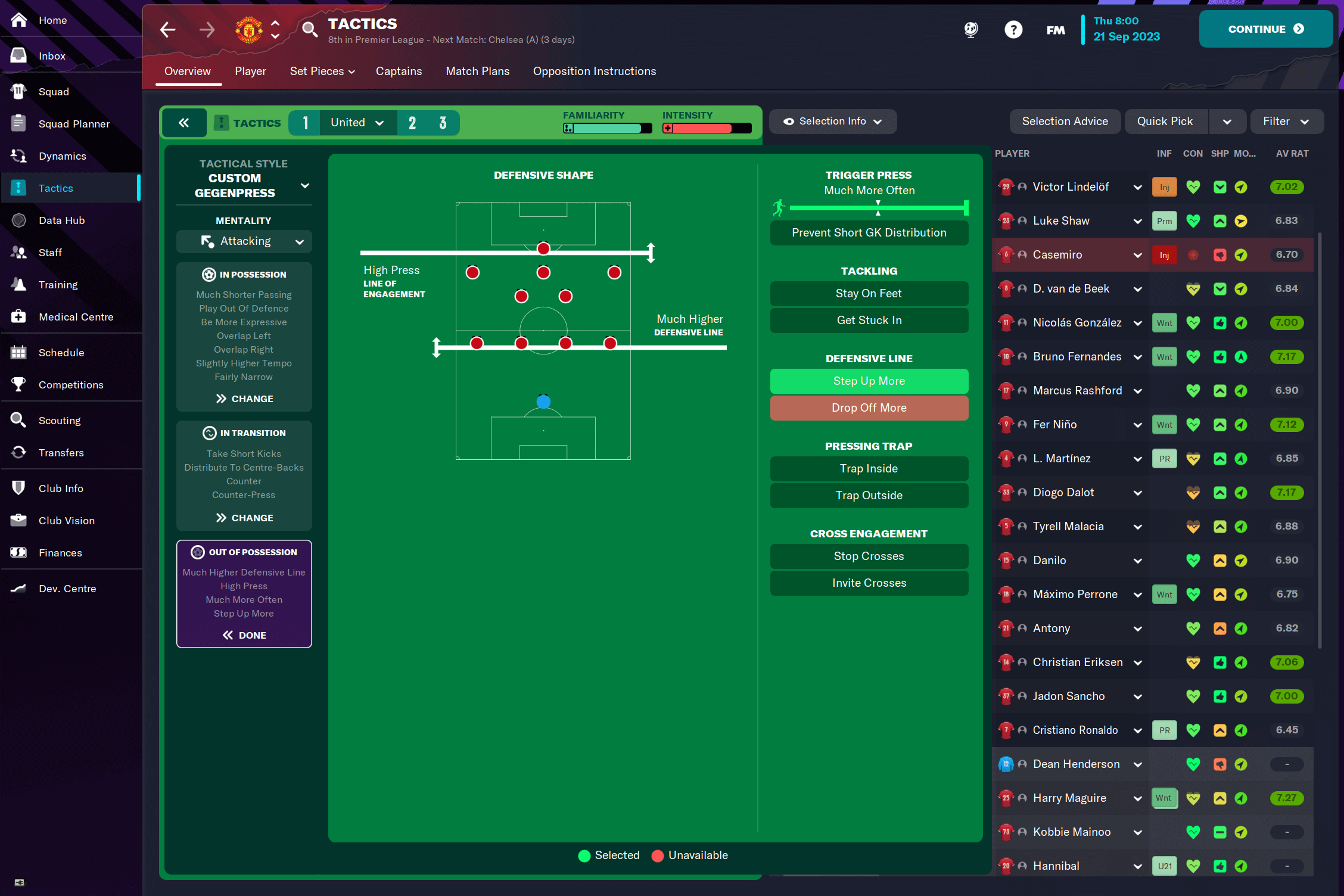 These tactics were highly effective in some cases, at least initially. Whether that was only because I was using superior clubs like Man United and Chelsea is unclear. However, in the long run, they proved very inconsistent.

When I started to observe opposition build-ups more carefully, I began to find out why. I often thought I was simply getting FM’d, and despite dominating possession and having many more chances, I was unexplainably losing games. This was not the case. I was conceding extremely clear opportunities, and this was a direct result of our ineffective high press. The opposition did not need as many chances to score, because we were giving them the few they needed.

Looking back at our 2-3 defeat to Man City, where we lost to a header in the last three minutes, we can see why. For some reason, although our defensive structure was high into the opposition’s pitch, we were not marking correctly. The opposition was often playing simple balls higher up the pitch to players who had tons of time, like İlkay Gündoğan below. 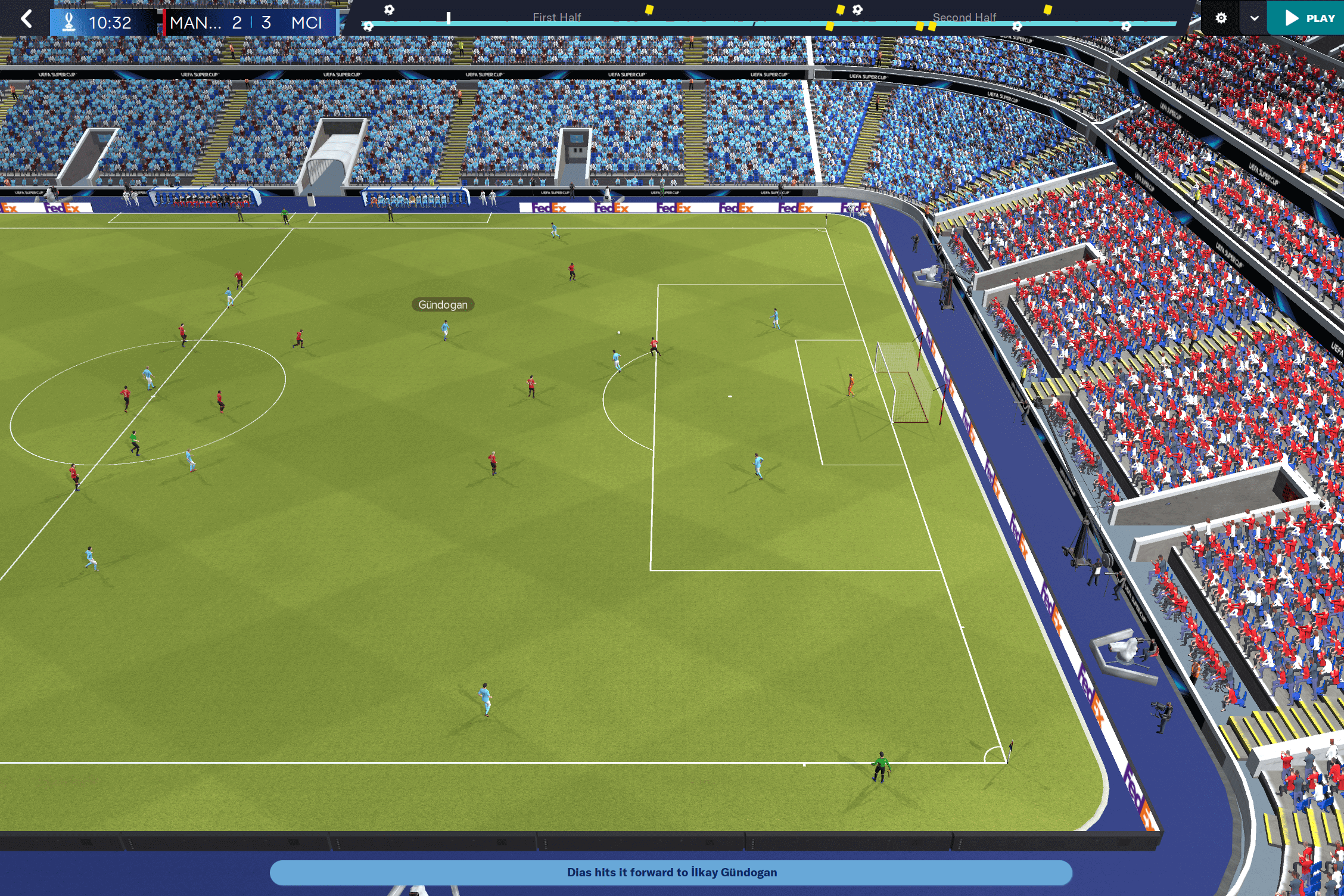 These players would have more than enough time to turn and pick out another forward pass up the pitch. In the same instance, Gündoğan turns and finds Bernardo Silva, who is not being marked correctly by Luke Shaw either. This small segment told the whole story, and I got to work to figure out how to change this, and how to keep the opposition from playing through us so easily. 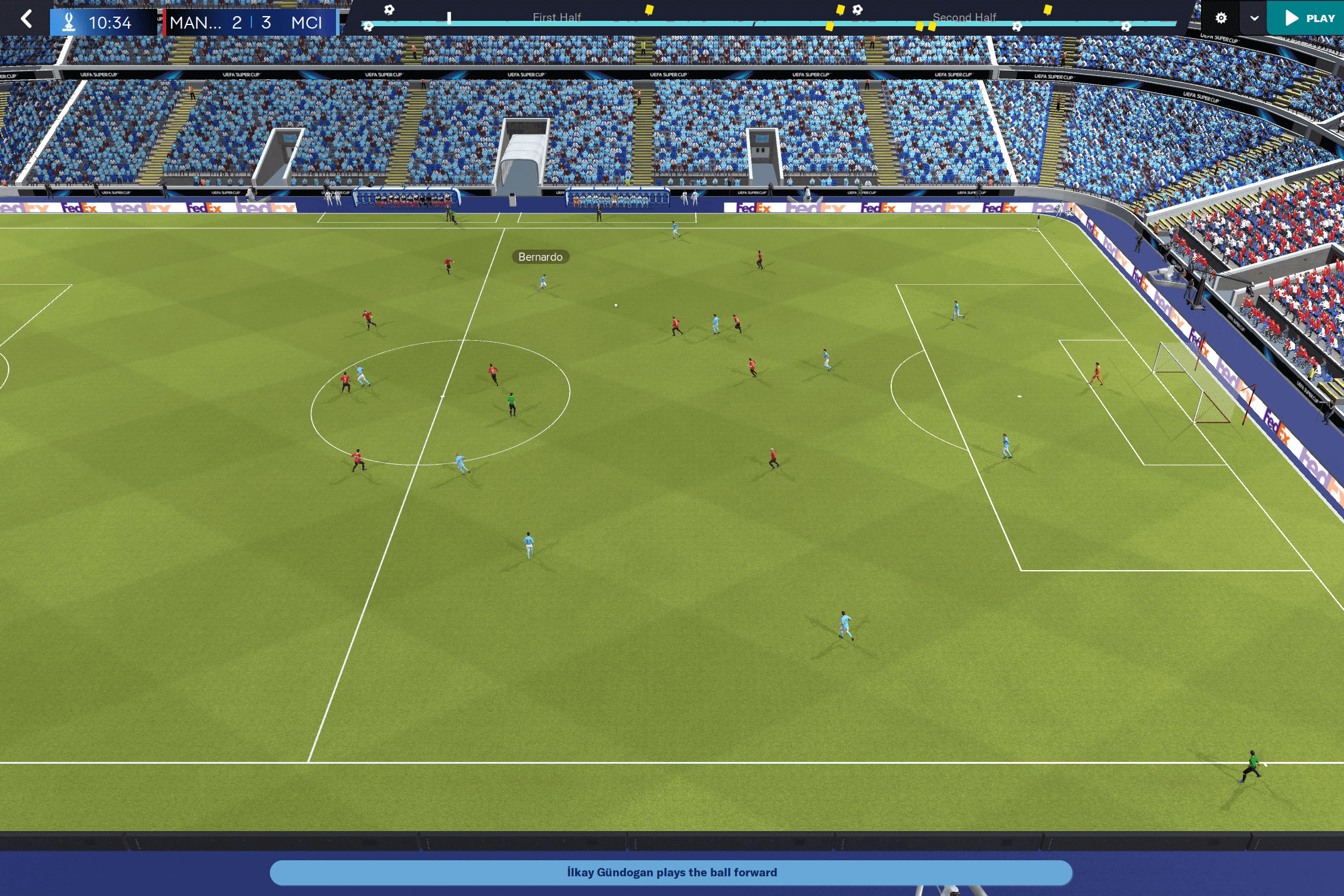 The answer was a mid-block. I lowered the line of engagement to a mid-block and the defensive line to a standard height. I obviously removed the instruction to step up more, and I left the cross-engagement on a match-by-match basis. The trigger press was changed to the middle setting, which was slightly more often in our attacking mentality. This was because, although in some instances we certainly want to press, it is not always. When the centre-backs have the ball, I don’t want my players flying at them, causing our defensive organisation to get stretched. However, there was a bit more to do. 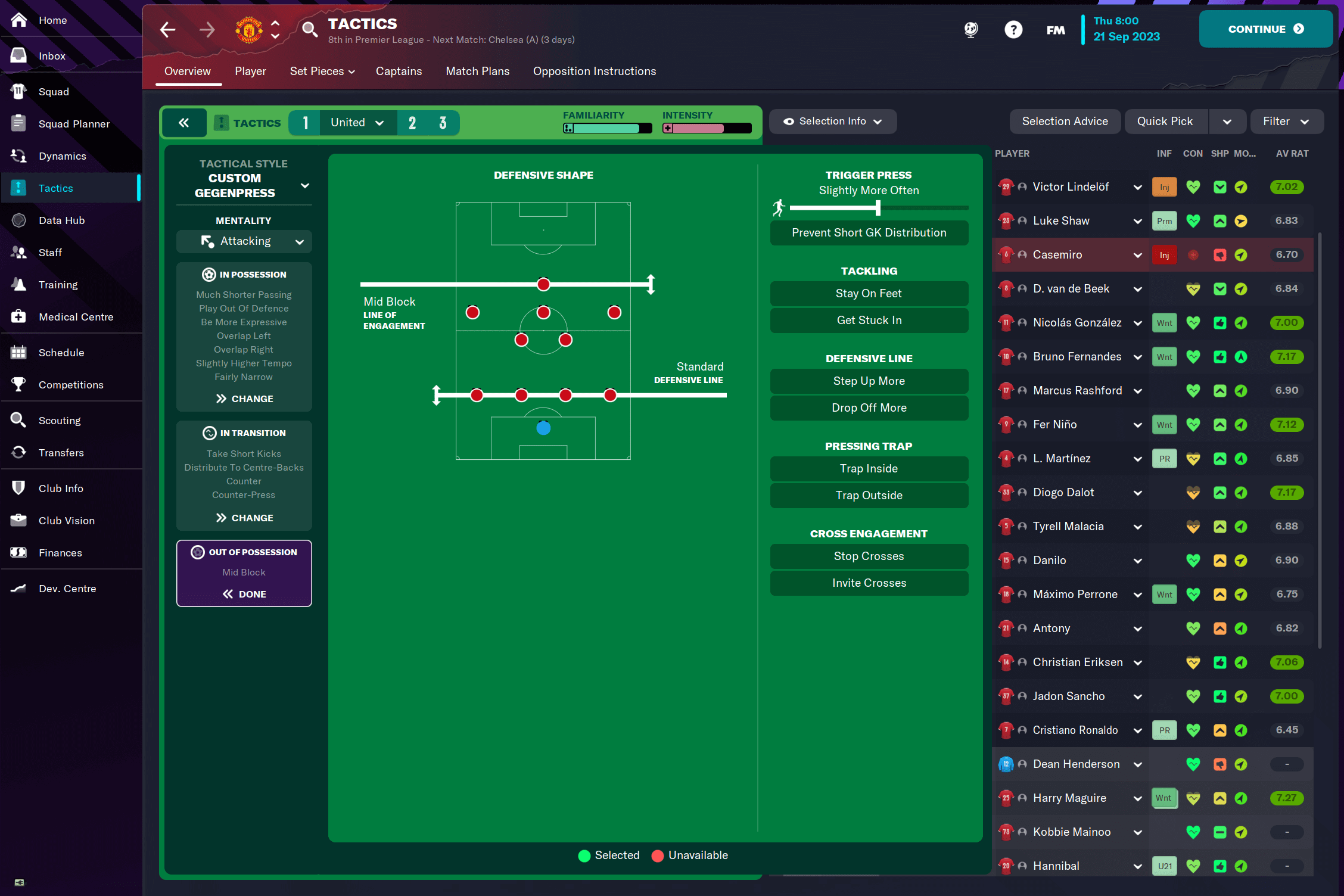 This is where the importance of opposition instructions comes in. While the settings above instructed the overall approach out of possession, a lot of the ideas, movements and positioning I wanted from my players were still not communicated. I found the ability to do these through the opposition instructions tab, changing these game by game.

Of course, against different structures, these will change slightly. However, this is the general idea. For the opponent’s centre-backs, I don’t want to do anything. As mentioned, I would rather my players let them have the ball and focus on eliminating options further up the pitch. The instructions begin with the fullbacks. First, I want my players to show them their outside feet and force them wide. This will eliminate the option to pass back inside. I also selected to always trigger press and tackle much harder against them. Against wing-backs, the same instructions can be used.

In the midfield, including wingers, I want my players to tight mark them, always trigger press, and tackle much harder. With the wingers, I want them to be shown outside as well, similar to the fullbacks. Of course, if their winger is a world-class crosser of the ball playing on their strong side, you might want to reconsider this. The overall idea is to let the centre-backs have the ball, force the ball wide, keep them from finding options inside, and if they do, allow next to no time on the ball for them. 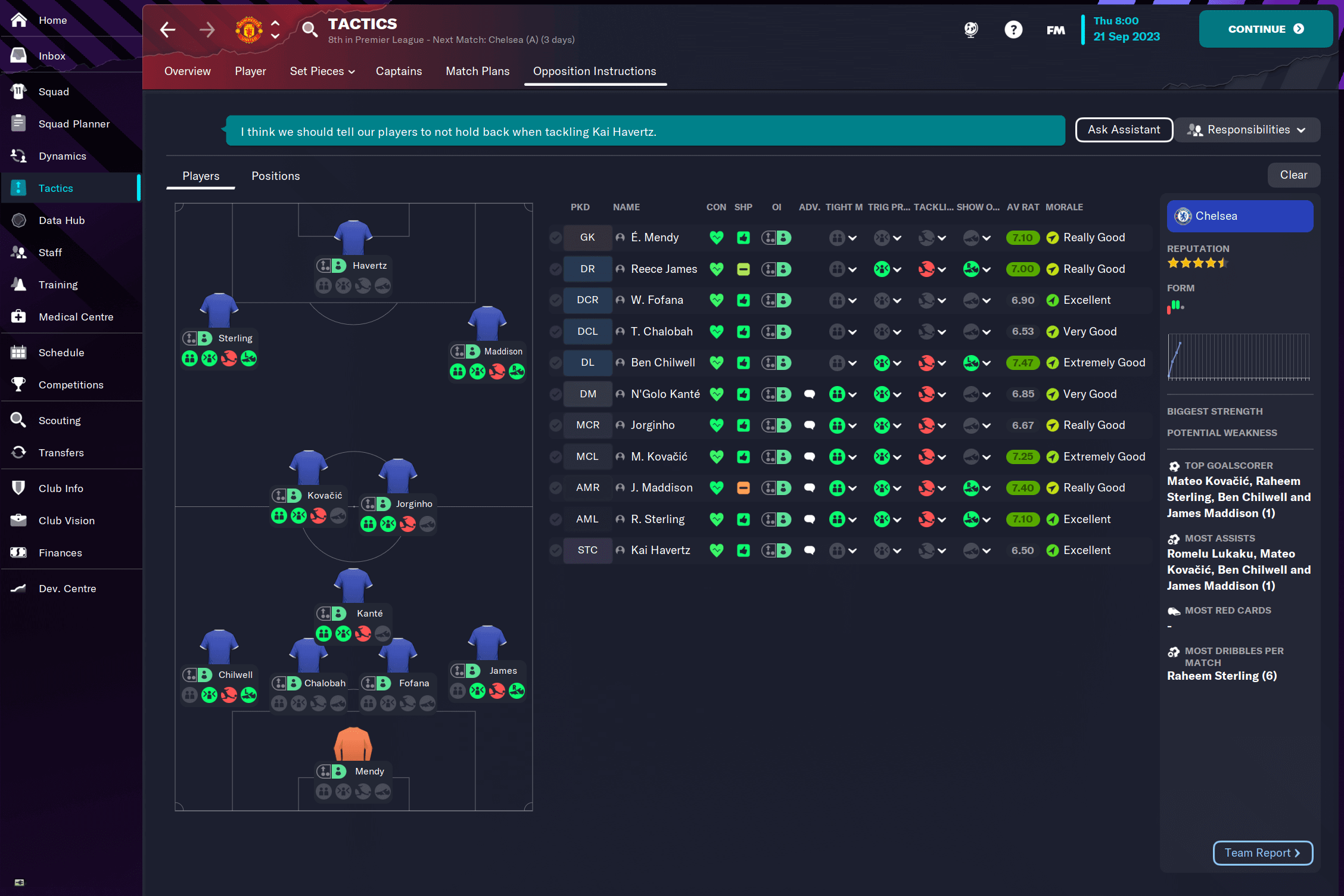 Now we can see these tactics in action, and how they are much harder to play through. In this first example, we can see our initial defensive structure. This is much deeper than previously, and the centre-backs are not receiving much pressure. Our line of engagement is lower, and we are more compact. As Real Betis try to play into their defensive midfielder, Christian Eriksen is already there to keep him from turning and progressing. 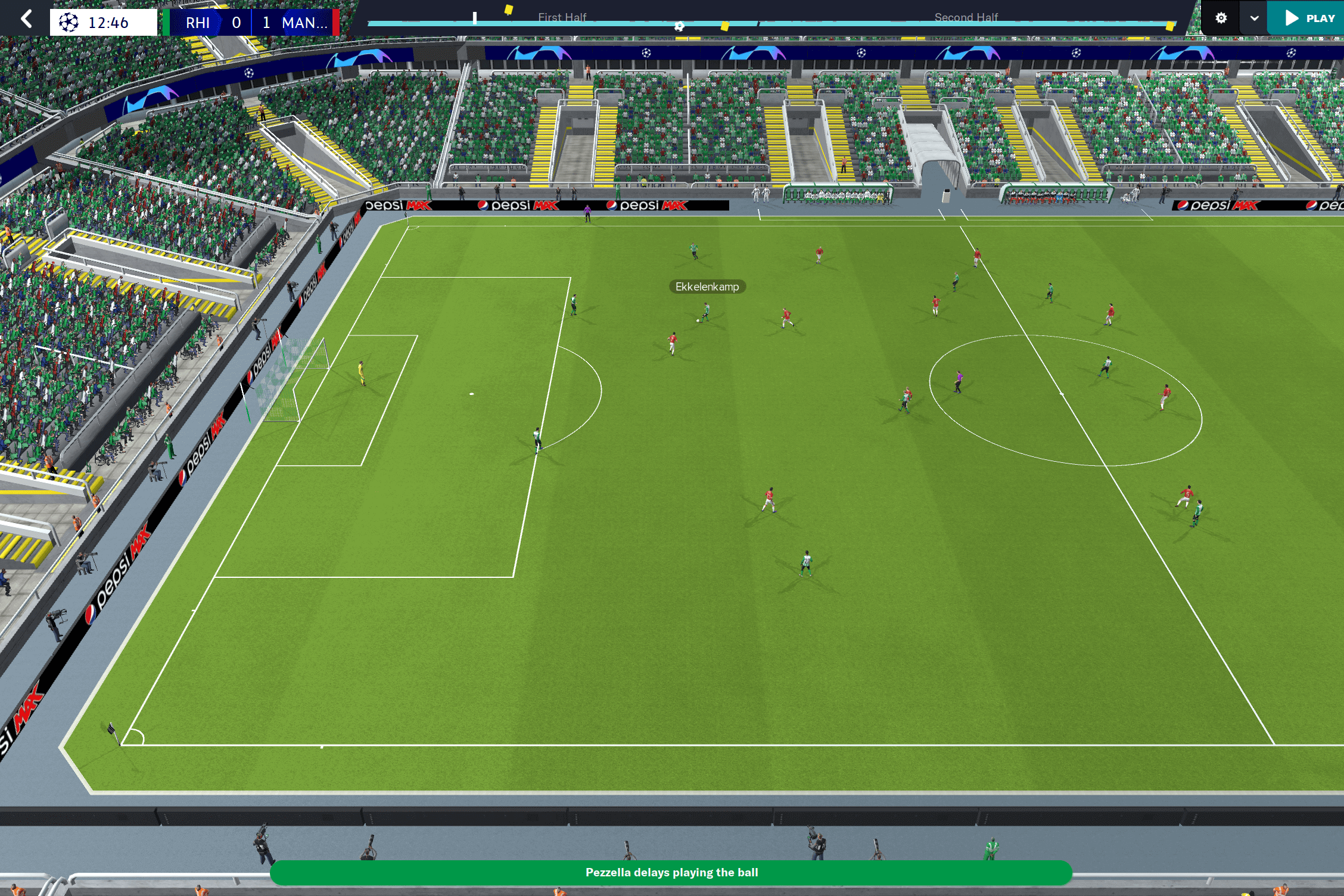 As their defensive midfielder plays wide to their fullback, Antony steps to press them as instructed. However, Antony angles his body to force their left back to the touchline and keep him from coming inside. This makes him play further up the pitch to their winger. 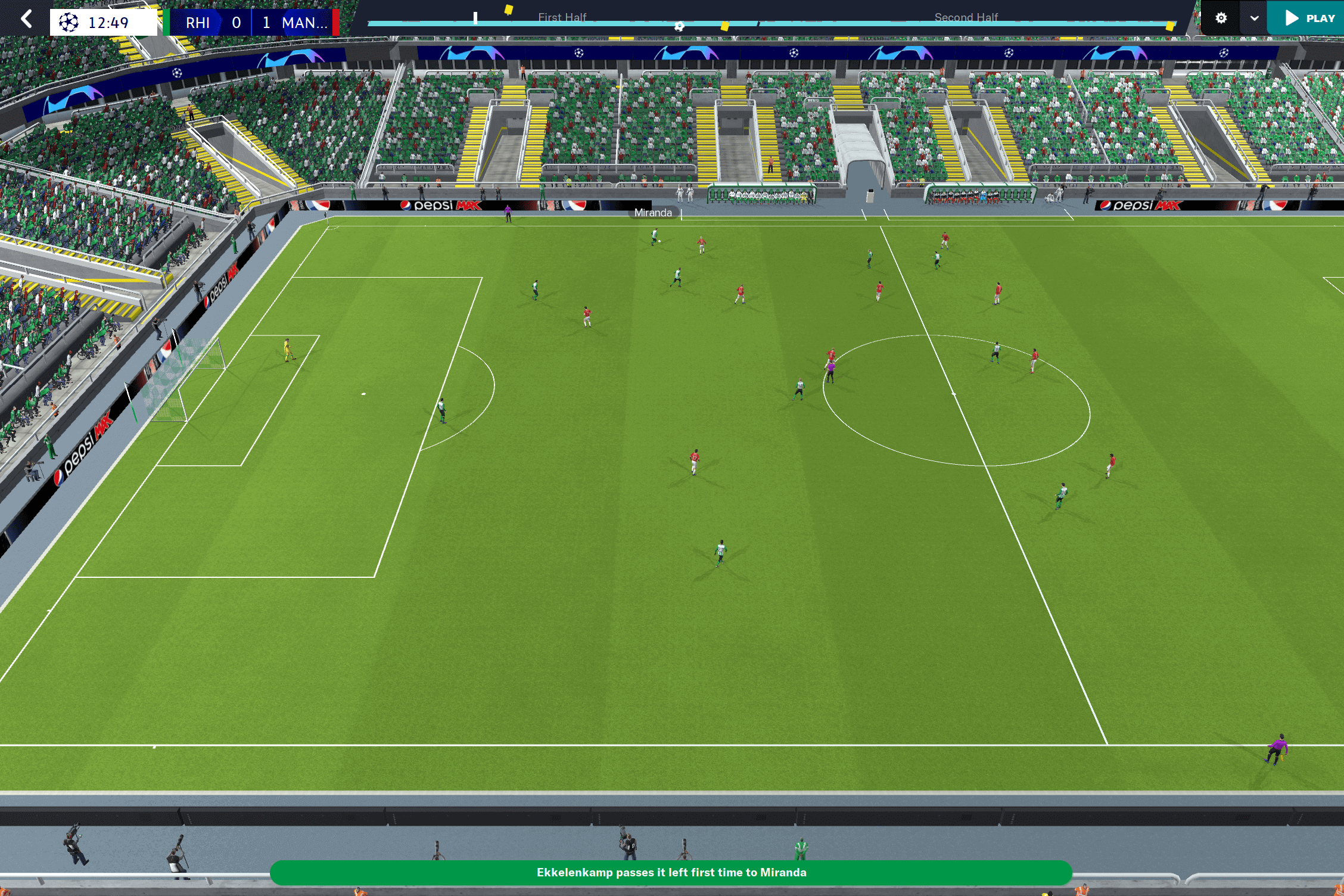 Once this ball is played further up the pitch to Juamni, a more advanced player, he is immediately boxed in by Antony and Diogo Dalot. We are able to recover possession and successfully keep the opposition from playing through us. This segment encapsulates our overall idea out of possession, which has the simple objective of keeping the opposition from progressing with danger and exploiting our high line. 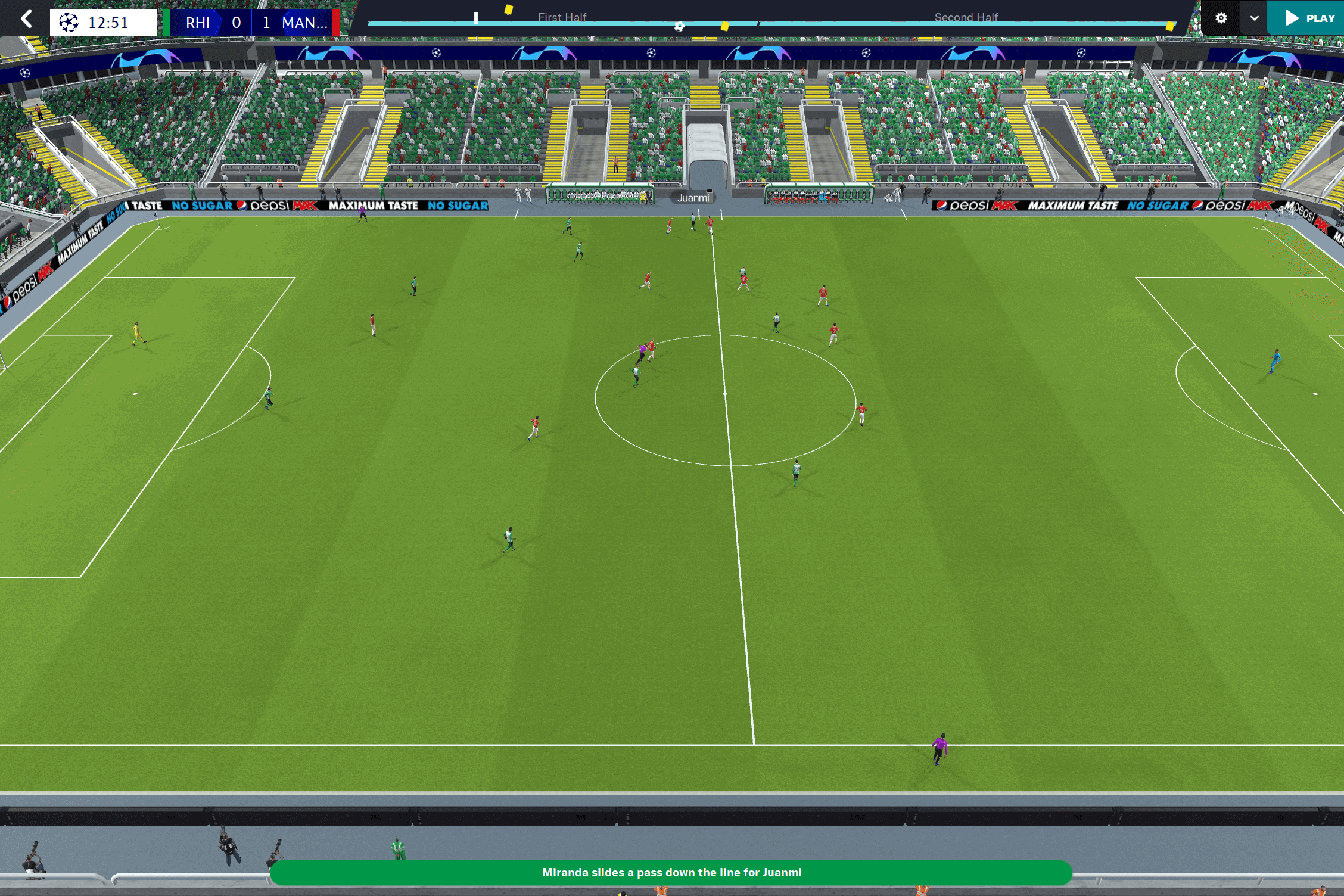 Tactics out of possession have completely changed this year in FM, unsurprisingly following recent trends in world football. They have become more complex, and a more detailed approach to setting up your team without the ball must be taken into account. Essentially, mid-blocks are much more effective this year, and the significance of opposition instructions cannot be underestimated.

Transfer Talk: Benjamin Šeško – Why are Manchester United targeting another...

Under the microscope: Jadon Sancho’s first season on his return to...