Manchester United will look for back-to-back wins when they host Wolves at Old Trafford in the English Premier League. The Red Devils are unbeaten under Ralf Rangnick and won three out of the four games played. Wolves, on the other hand, got affected due to the COVID-19 pandemic and saw their last two fixtures get canceled.

Manchester United won their ninth match of the season against Burnley in the previous round. The three goals scored against the Clarets took Manchester United’s goal tally to 30 goals. Their xG rate is 27.8, and they have the sixth-highest rate in the league. The Red Devils have attempted 245 shots and average 13.6 shots per match. The shot accuracy is a bit low as the players have managed to hit only 31.8% of the shots on target. 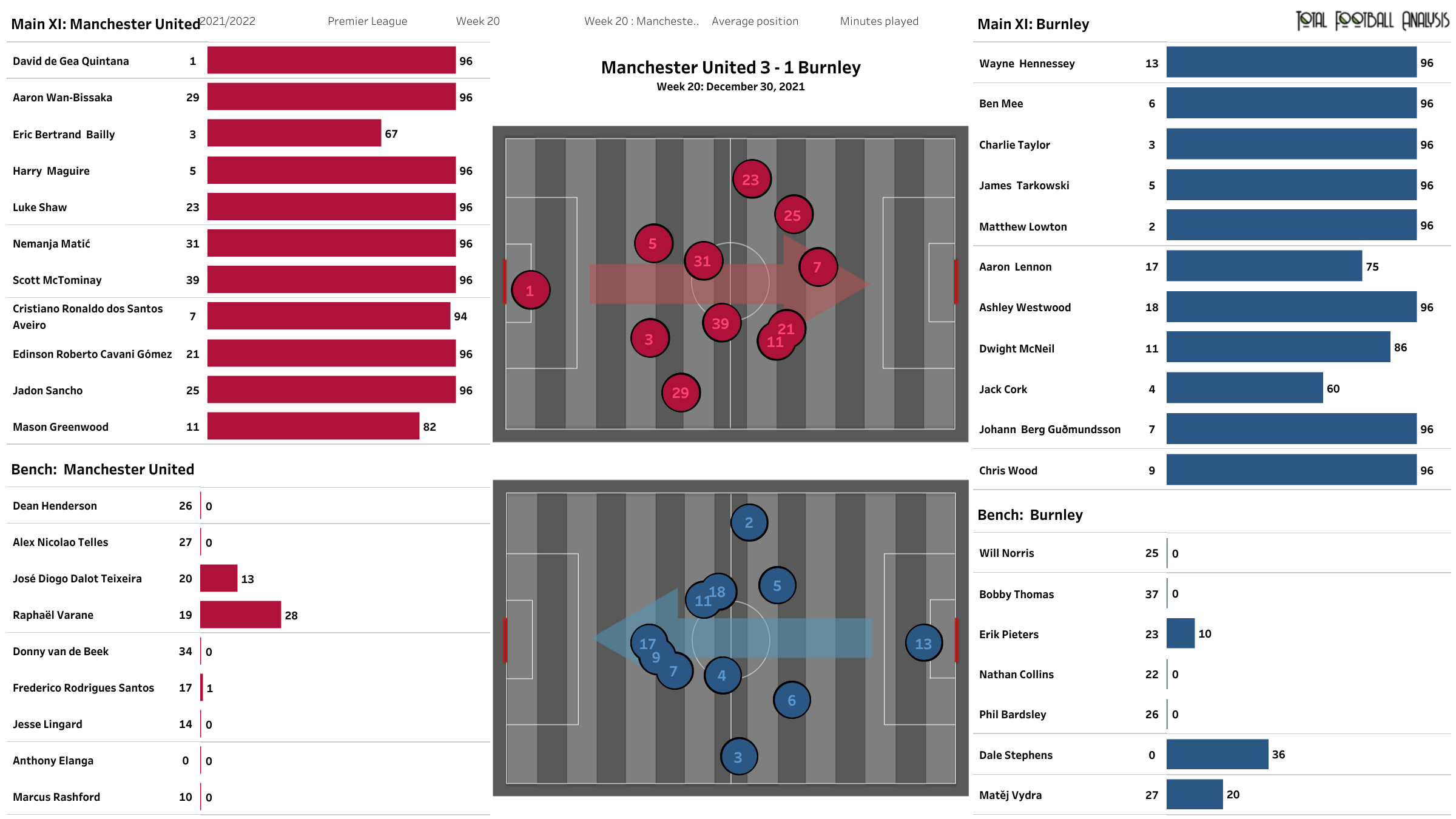 Manchester United started in a 4-4-2 formation against Burnley. Cristiano Ronaldo and Edinson Cavani started in the front row for the home team, while Luke Shaw and Aaron Wan-Bissaka started as the full-backs for the first time under Rangnick in the Premier League. The above viz shows the average position of the players against Burnley. Ronaldo looked like the lone striker upfront and was supported by Cavani, Greenwood and Sancho. The players attempted 20 shots with six of them on target. 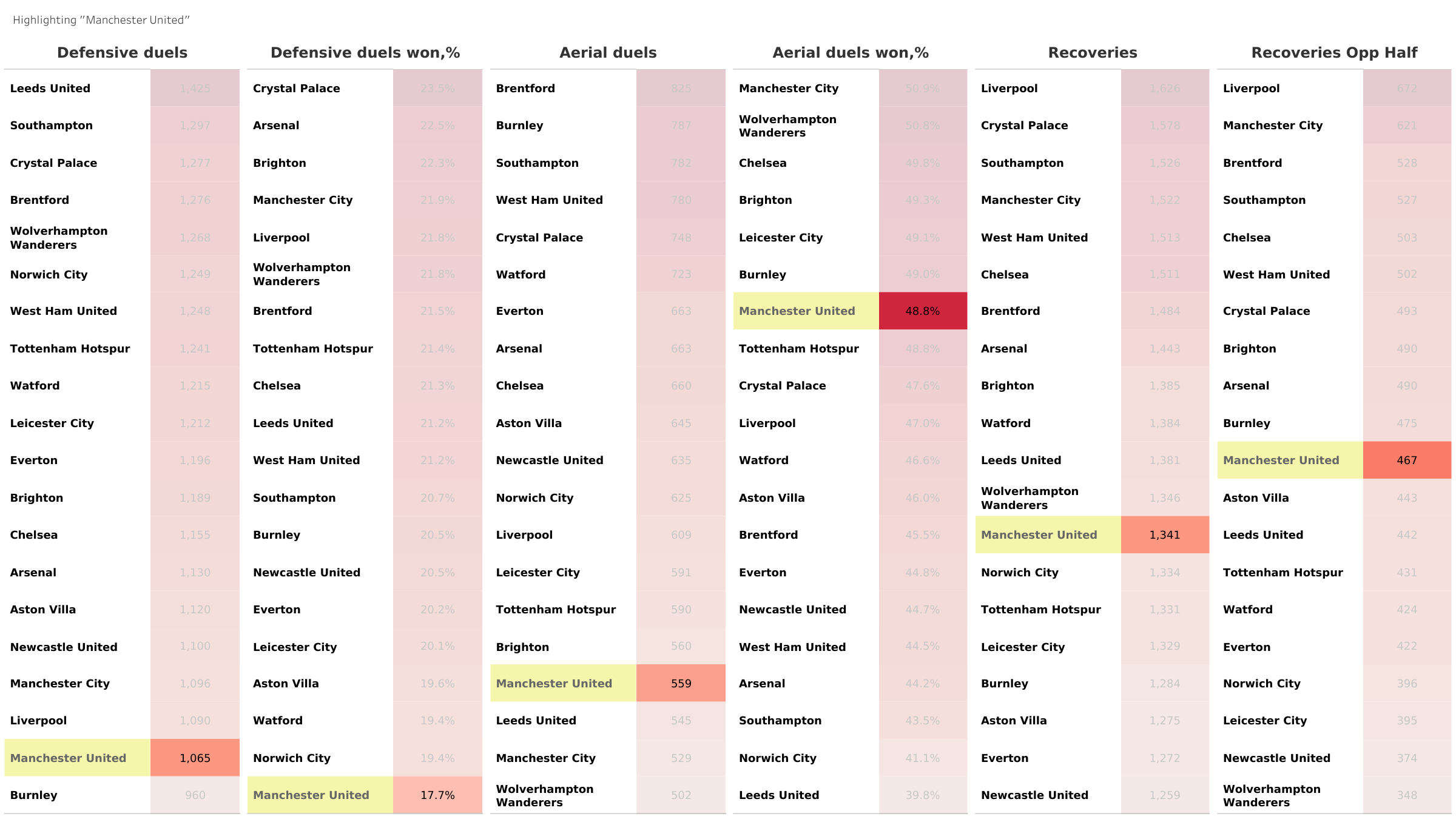 Manchester United’s defense has been a concern this season. They have conceded 26 goals and only managed to keep four clean sheets. The above viz shows that Manchester United have the worst defensive duels win % in the league. They have contested the second-lowest amount of duels. When we look at the aerial duels, then the win % is a lot better in comparison to the defensive duels.

Cristiano Ronaldo took his goal tally to eight in 15 appearances. He also has three assists to his name. Scott McTominay opened his goal-scoring tally in the Premier League this season. Bruno Fernandes will return from suspension in this game. Raphael Varane is expected to start in place of Eric Bailly. There are no new injury concerns for the home team.

Wolves’ team will return to action after a break of two matches due to the outbreak of coronavirus pandemic. They remain in the top half of the table and are six points behind their opponents this gameweek. Bruno Lage’s team averages less than a goal per match and have scored 13 goals in 18 games. 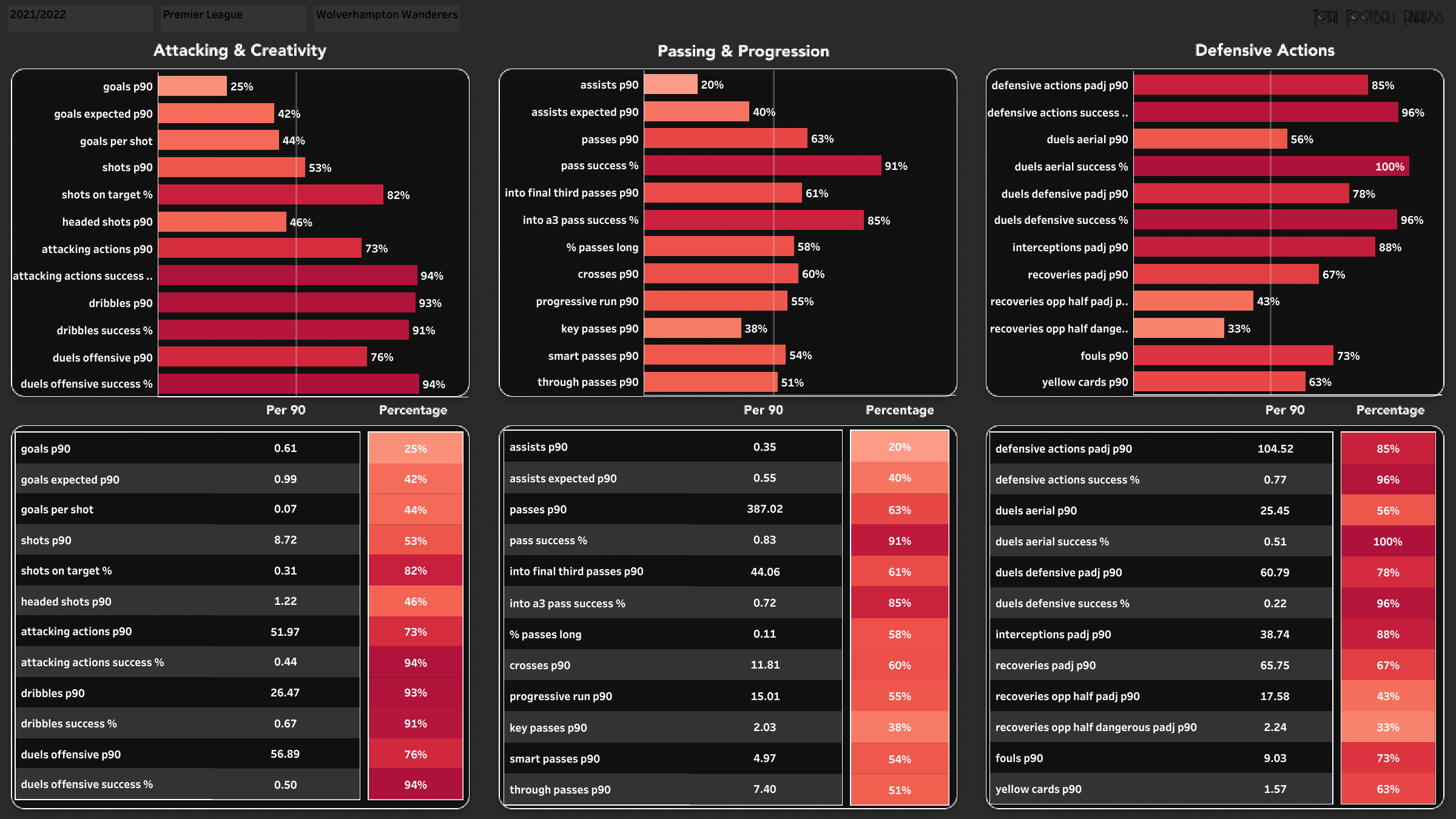 When looking at the above chart, the general rule is that the longer the bar, the better the performance – you can see the league average in the middle, and the % is the percentile rank the player is in. Wolves average 0.61 goals per 90, and their xG rate is 19.45. They have scored the second-lowest number of goals in the Premier League this season.

From the passing and progression chart, we can observe that Wolves’ percentile rank is just above the average line. Their passing accuracy rate as well as the passing success rate into the final third have been on a higher side. Wolves have been involved in a lot of defensive actions and have won the most aerial duels in the Premier League.

Hwang Hee-Chan, Pedro Neto, Jonny, Rayan Ait-Nouri, and Willy Boly are expected to miss this match. The manager is still unsure about the availability of players who got infected due to the coronavirus.

Manchester United will look to make it two wins in a row against a Wolves side struggling for goals. Cristiano Ronaldo will look to catch Mo Salah in the goal-scoring chart as the Egyptian is expected to miss a few matches due to the international duty for the Africa Cup of Nations.

United pushing to become force once again under OGS