Preorder Football Manager 2023 through our friends at Fanatical and get 30% off by using the code FM23DAILY.

One of the features that sets Football Manager apart from other football games is the inclusion of youth players. From non-league teams to the world’s biggest clubs, Football Manager has all of the young prospects around the world. In addition to the realistic feel around this, there is something special about developing a young academy prospect into a regular first-team player. It is not an easy task though. As with everything else in FM, developing and integrating youth players is a complex task with numerous factors to consider. However, for many clubs in the game, the youth academy may be the best resource in the long term.

That is especially the case for Manchester United. After being on top of the world for so long under Sir Alex Ferguson, the Reds have struggled to reach similar heights. For nearly a decade now, UEFA Champions League appearances have been hard to come by, not to mention titles. Taking over United in FM23 represents a long-term project to reinstate the Reds as one of the most successful clubs in the world. While there are numerous issues that require immediate attention, in the long term, resorting to the youth academy may be the best solution. In addition to being a cost-effective approach, it restores a sense of identity to Old Trafford. The Champions League-winning side of 1999 was dominated by the famous class of ’92 and with numerous exciting prospects in FM23, a similar approach can be taken.

In this article, we will explore some of the most promising players in United’s academy. Using FM22, we will examine what stage they are in their development, their realistic potential, how and when to integrate them into the first team, and many other factors. Among others, their current ability in FM22 was one of the most significant factors behind their inclusion on this list. In real life, throughout the last year, some of them have been loaned for more experience while others have been slowly integrated into the first team. At any rate, this article aims to give a detailed insight into their profiles and future in the game.

We start off with Ethan Galbraith, one of the older players on this list. Born in 2001, the Northern Irish midfielder is already 21 years old. Ethan moved to United from Linfield in 2017 and since then, has gone on loan to Doncaster Rovers and now Salford City. While his future at Manchester United is uncertain in real life, he is a gem in the game. The 21-year-old is a technical midfielder who could be slowly integrated into the first team upon his return, especially in cup games. Additionally, with a lack of depth in the first team’s midfield, his contribution could certainly become important. Whether he becomes a part of your long-term plans or not will very much depend on his performances, but at any rate, integrating him into the senior squad will see his transfer value rise tremendously. 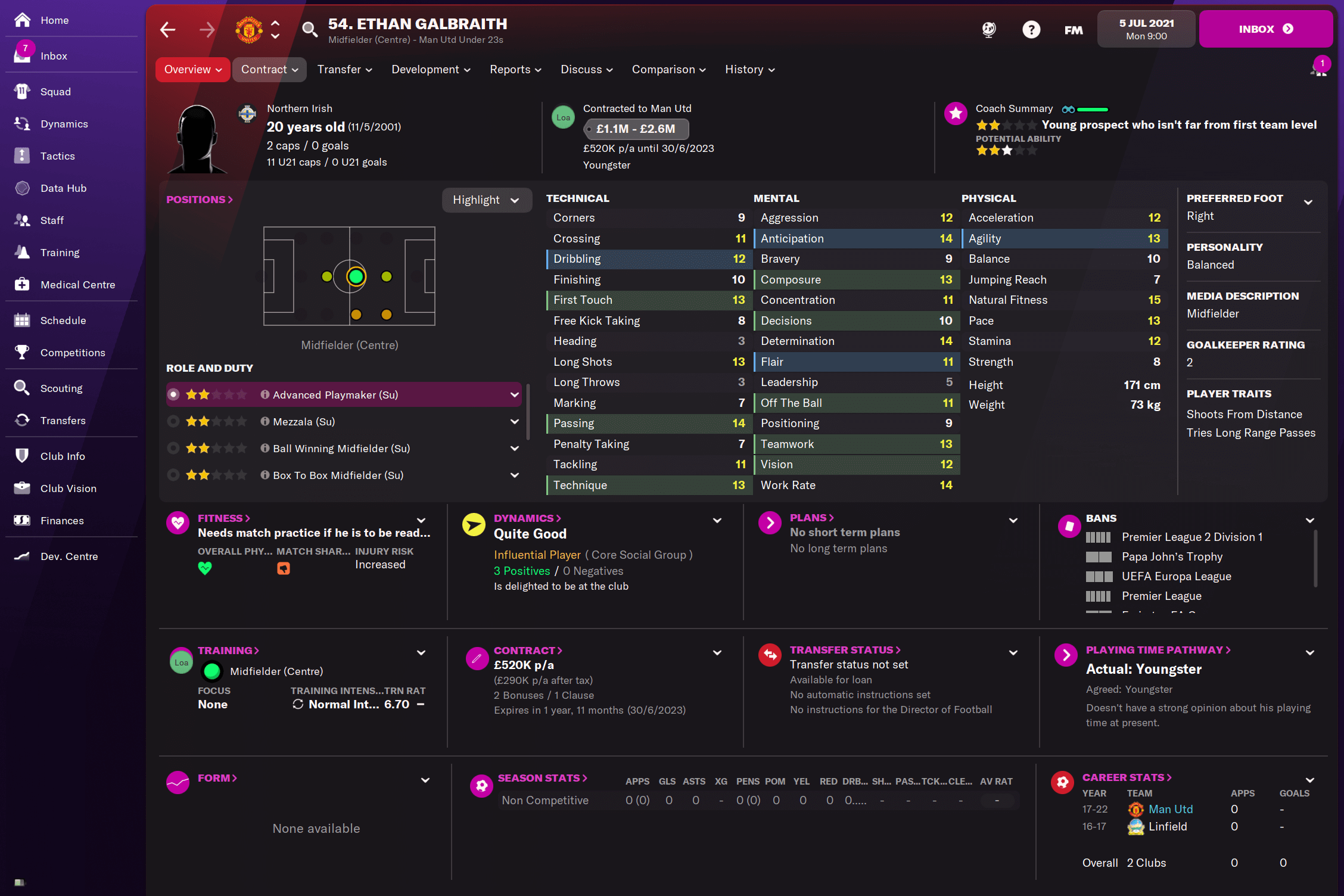 As mentioned, Galbraith is a rather technical midfielder. With 14 passing, 13 technique, 13 first touch, and a few other notable attributes, he has a very good technical profile to build around. Additionally, his 15 natural fitness, 12 stamina, and 14 work rate will see him effectively compose the midfield throughout a match. Finally, with 14 determination among others, he has decent mental attributes to develop around. His lack of defensive ability is perhaps the most notable weakness in his game. However, if he is complemented with more defensive players around him, this should be far from a problem.

As he has gotten older, his potential ability has naturally narrowed. However, Ethan Galbraith certainly has the quality to be integrated into United’s senior team as it goes through a rebuild. Whether he will remain a part of the squad for years to come or not is still unknown, but he can definitely prove useful in the first few seasons.

On the other end of the spectrum, there is Isak Hansen-Aarøen. While Isak is rather similar to Galbraith in his playing style, he is much younger and with a much higher potential. The Norwegian youngster is only 18 years old, currently playing with Man Utd U21 in the Premier League 2. Throughout the last year, he has developed further, and in FM23, should be expected to receive another upgrade. The 18-year-old already had an incredible profile in last year’s game, and despite his young age, he could be promoted very soon. 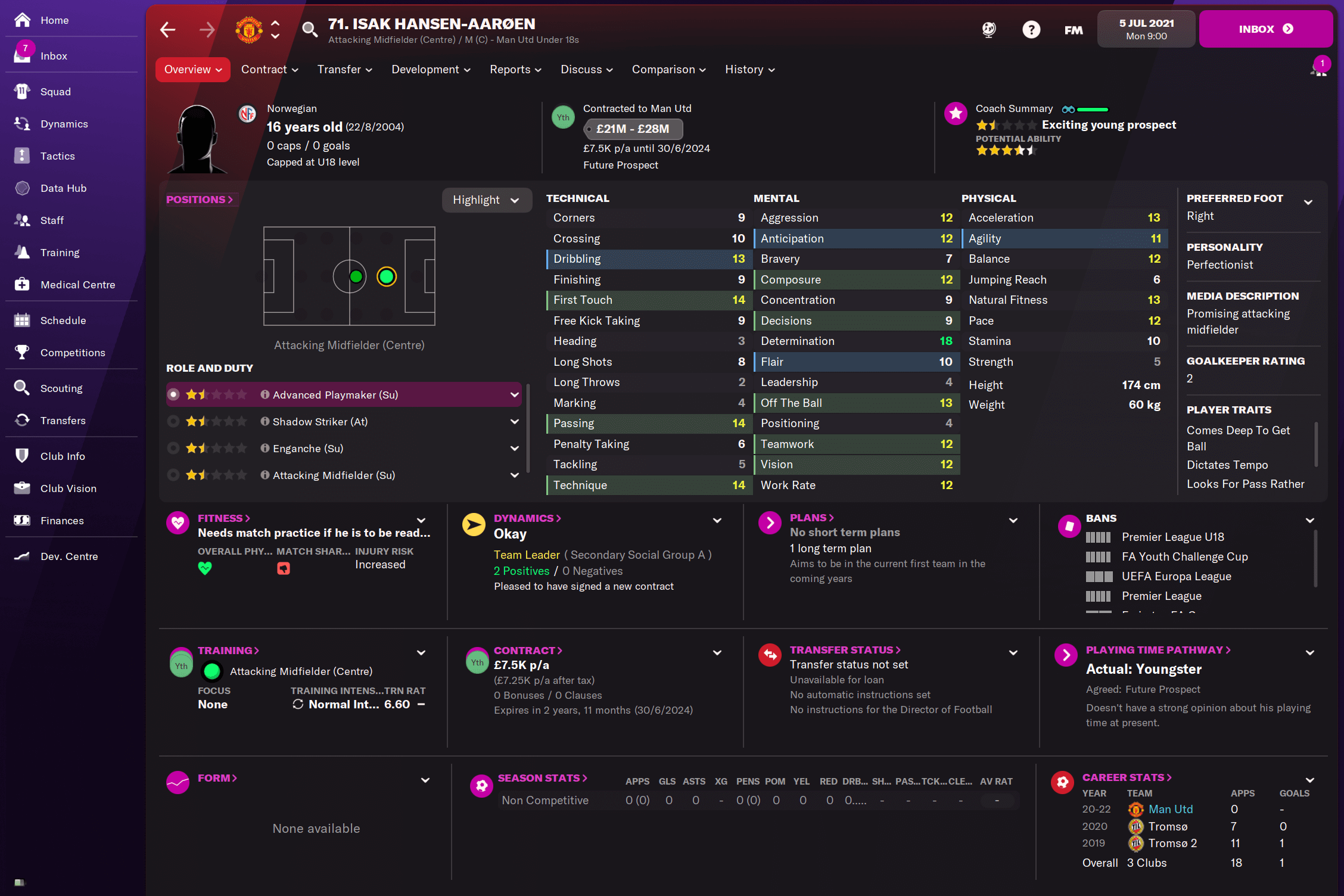 The Norwegian is a much more advanced midfielder but can still be used in deeper roles. His dribbling, first touch, passing, and technique are all already at 14. Mentally, he is very well-rounded with an exceptional 18 determination standing out. Finally, he is much more technical than he is physical, so that may be an area that could require further attention. Nonetheless, he is a creative midfielder with the potential to become the Reds’ architect in the future. In addition to his attributes, his traits and personality are very impressive. His player traits further highlight his significant involvement in the midfield, with him looking to get on the ball, dictate the tempo, and constantly look for passes. Additionally, his personality is defined as a perfectionist, which is more than ideal.

Hansen-Aarøen has an excellent profile, especially for such a young age. The 18-year-old could be instantly promoted to the senior team and made available to play with the U23s. This way he is able to be slowly integrated into the first team and occasionally given chances. As Bruno Fernandes gets older, Isak could certainly be his replacement as he comes with a very similar profile.

Next up is Shola Shoretire, an 18-year-old attacker with numerous caps for England’s youth national teams. Shola plays alongside Isak in Man Utd U21 but with a much different profile. The 18-year-old has a much bigger contract as he is definitely a part of the first team’s future in real life. With him, a similar approach as Isak can be taken, as he is still young but with the ability to be slowly integrated into the senior squad. 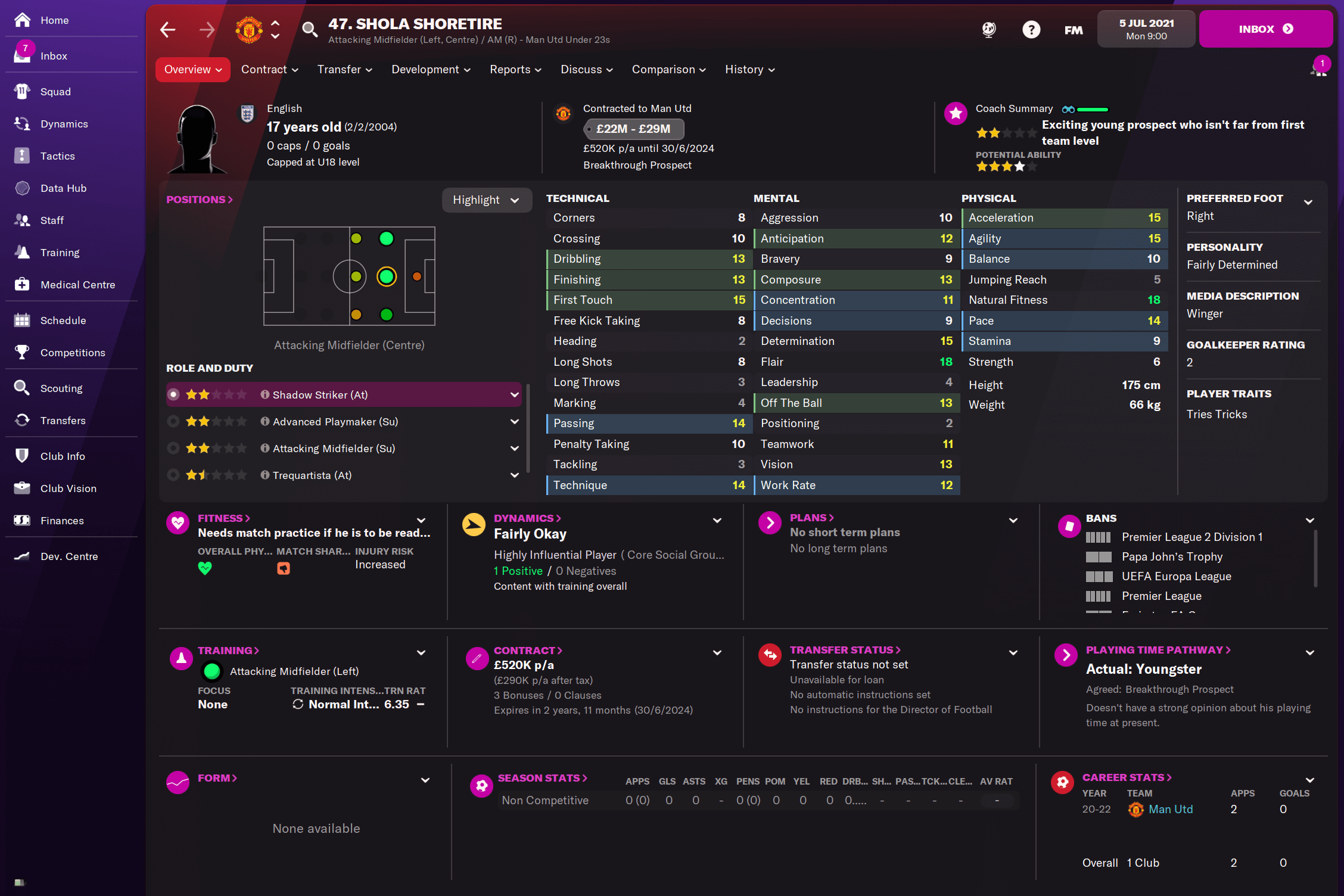 Shoretire is a talented and versatile attacker. The Newcastle-born youngster is able to play on either wing or as an attacking midfielder. From shooting to passing, his technical ability is undeniable. On the other hand, although he has good determination and composure, his concentration and decision-making must be developed further. His 18 flair is especially notable, as combined with his ‘tries tricks’ player trait, he is a rather entertaining player. Physically, he is rather underwhelming. Although he has 18 natural fitness, his 12 work rate and nine stamina significantly undermine that.

Shoretire is a stereotypical tricky winger, and under the right guidance, he could be a dangerous weapon for United’s attack in the future. There are certain factors that must be given extra attention, such as his physical profile. Nonetheless, he is a very exciting prospect that could become a key part of United’s attack in three to four years.

Zidane Iqbal is one of the more popular prospects on this list, especially due to his unique character. The Iraqi international is only 19 years old but with decent current ability. His playing style and attributes are very similar to Galbraith’s, albeit Iqbal is much younger. He is able to play either as an eight or a number ten. Although he does not stand t as an extremely exciting prospect, he has the potential to become a part of United’s senior squad. If not, there is decent revenue to be made from a potential transfer.

Though he is not a very good dribbler, his passing, technique, and first touch are very good. In addition, his mental profile is very well-rounded, with the majority of attributes being over 10. Tactically, his mental and technical profile is perfectly shaped for an advanced playmaker role. On the other hand, physically, he is rather underwhelming. Finally, personality-wise, he is very average.

In comparison to the previous prospects, Zidane may not be as exciting. Nonetheless, with the correct development, he could easily become a part of Manchester United’s squad. Similarly to Galbraith, even if he does not become a regular in the future, he could bring in significant transfer revenue.

The last prospect is Facundo Pellistri, a 20-year-old winger who joined from Peñarol in late 2020. The Uruguayan international was a regular at Peñarol and after a year on loan at Deportivo Alavés, has returned to Old Trafford. Since then, he has struggled to establish himself in United’s first team. Nonetheless, in FM22, he was a very exciting prospect with tremendous market value. 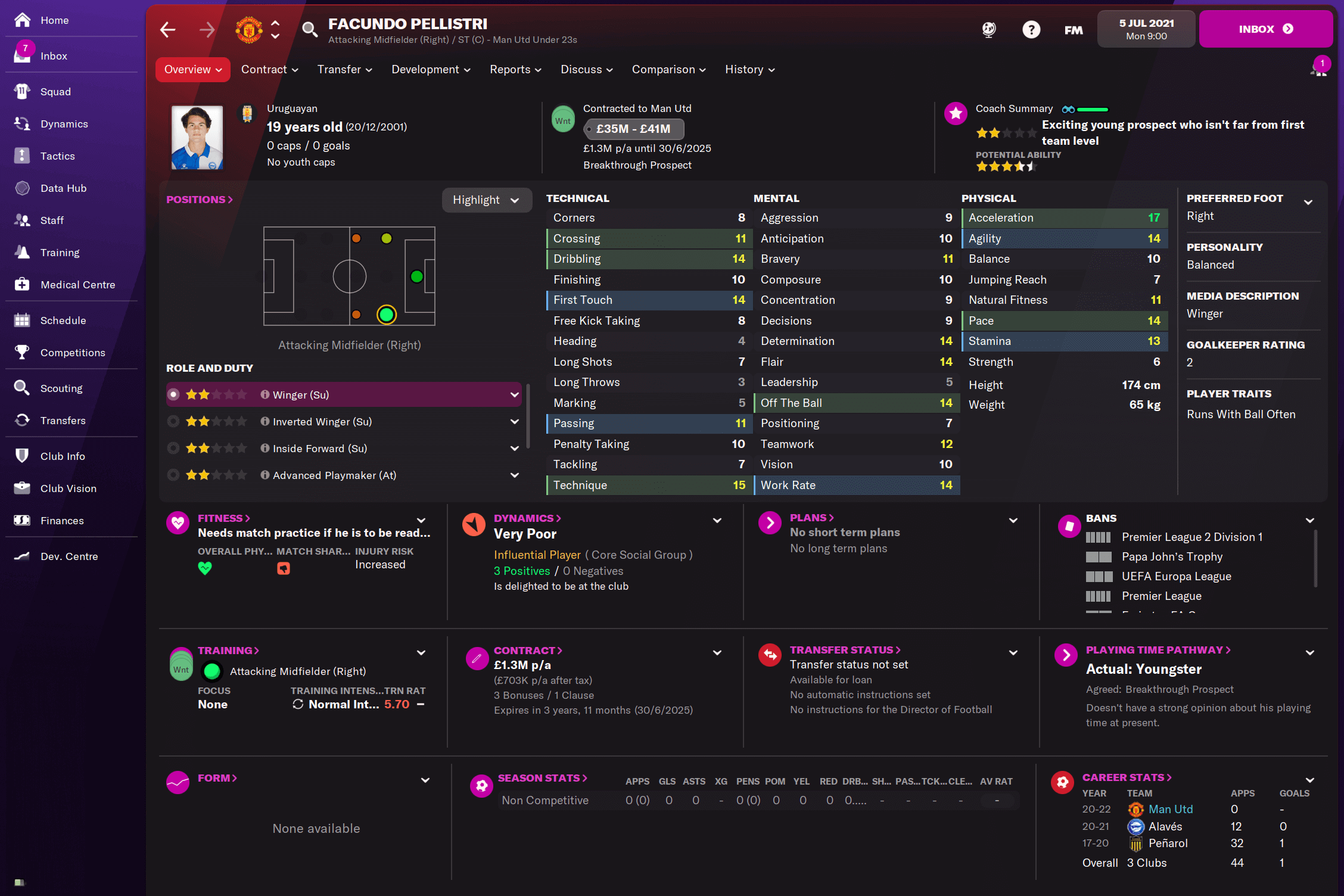 Facundo Pellistri is a traditional pacey winger with flair. As in real life, the talented youngster can be slowly integrated into the senior squad and given occasional chances. At any rate, there are a few areas that must be given extra care and developed further. Most notably, his mental profile is rather underwhelming. Additionally, there are a few select areas in the technical and physical departments that could be strengthened. Finally, positioning-wise, as he is right-footed, it could be worth developing his tactical familiarity on the left wing.

Although he may be a little raw in some aspects, Pellistri is a valuable prospect who could be integrated into the first team throughout the first few seasons. In addition to an extremely high value, he could certainly become a key part of United’s attack in the future.

Taking Manchester United back to the elite of world football is definitely not an easy task. While there are numerous issues that require immediate attention, in the long run, resorting to the youth academy may prove to be a very reliable strategy. The Reds’ academy has numerous exciting prospects with the potential of leading United for years to come. Similar to the famous 1999 Champions League-winning side, homegrown talent may be the guide for United’s trajectory back to the top.

Under the microscope: How Super Sub Marcus Rashford has made an...

Under the microscope: Can Marcus Rashford lead his team to glory...