Preorder Football Manager 2023 through our friends at Fanatical and get 30% off by using the code FM23DAILY.

The recent controversy around Cristiano Ronaldo’s role under Erik ten Hag underlines a bigger problem at Manchester United. For years now, the Reds have struggled to find a consistent and reliable number nine. With Anthony Martial struggling to reach his potential and Marcus Rashford lacking consistent output, United’s attack has been extremely underwhelming in recent years. As far as recruitment, there has been a notorious lack of strategy and planning under the Glazers’ ownership.

As it stands, United currently have three players able to play up top. The first one is a club legend and one of the best players of all time, Cristiano Ronaldo. However, the Portuguese striker only has one year left on his deal and is currently 37 years old. Additionally, while Martial is a true centre-forward, there are many discussions regarding Rashford’s best position. The 24-year-old is certainly able to play in the number nine slot, but he is at his best when cutting inside from the left wing. All of these issues lead to one conclusion. Signing a true striker is a top priority for Manchester United.

As Football Manager 2023’s release date approaches, many people are starting to look ahead to possible save ideas. Perhaps the most exciting one, amongst the biggest clubs in the world, is taking over Manchester United. The Reds are one of, if not the biggest club in the world. However, this prestige and reputation have not been translated into trophies, at least not in recent years.

The challenge of taking Manchester United back to the absolute top of world football is an exciting one, and although there are many issues to take care of on the way, signing a true striker is perhaps the most urgent. In this article, we will go through realistic transfer targets for you to consider when loading up your Manchester United save. For accuracy and realism, we have used FM22 in order to ensure these players are interested in coming to Old Trafford. As many FM players will know, your options tend to be limited to players interested in joining, and without the guarantee of UEFA Champions League football, United’s options are limited in the first season.

We start off with perhaps the most obvious one. This past transfer window has seen some of the world’s biggest strikers move around European football. From Gianluca Scamacca and Alexander Isak to Erling Haaland and Gabriel Jesus, numerous potential targets have become unavailable. However, one of the most promising centre-forwards has stayed put, and he goes by the name of Victor Osimhen. The Nigerian number nine moved to Napoli in the summer of 2020, and since then, has been directly involved in 40 goals in 68 appearances. 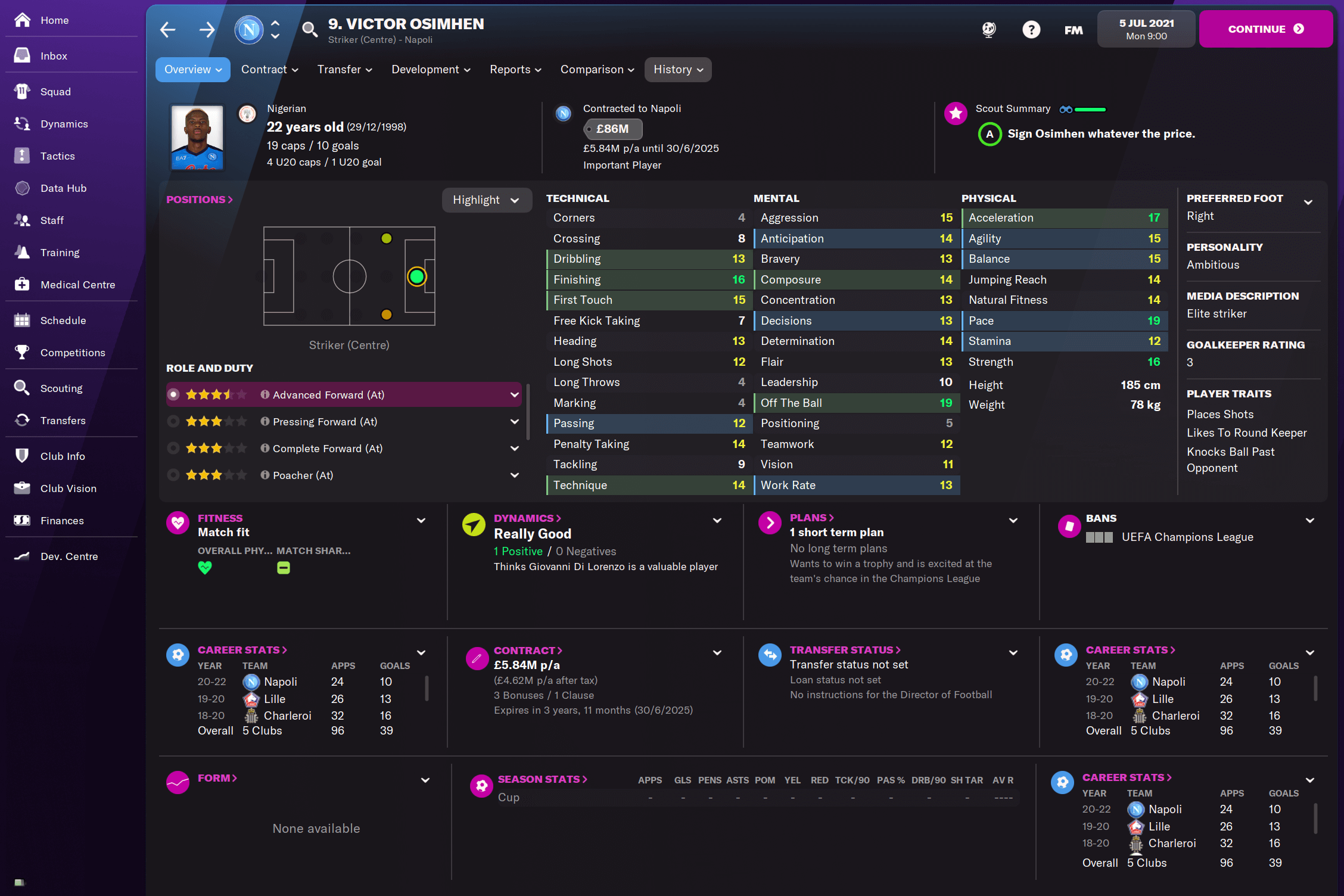 As the 23-year-old is quickly becoming one of the best centre-forwards in the world, he will not come for cheap. It is unknown what United’s initial transfer budget will be in FM23, but nonetheless, Osimhen would be a big chunk of it. With his contract going up to 2025, a fee north of £80M should be expected. While this is a significant fee, Osimhen is worth every bit of it.

The Napoli marksman has incredible physical characteristics, with 19 pace and 16 strength in FM22. Additionally, his 16 finishing combined with his 14 composure will see him finish chances for days. As far as roles, his three main options are Advanced Forward, Pressing Forward, and Complete Forward. These roles further highlight the 23-year-old’s developed and mature profile, with high abilities all around. Furthermore, these roles should suit any popular FM tactic.

Signing Victor Osimhen in the first transfer window would mean business. At 23 years old, the Nigerian would lead the attack at Old Trafford for years to come. Additionally, there is no better way to take the Reds back to the top than signing one of the best centre-forwards in the world.

Victor Osimhen may come with some heavy competition, and at such an expensive fee, he could become an unrealistic option depending on United’s initial budget. Right behind him, however, is another Lille product. With a lower transfer value, Jonathan David may be one of the best transfer targets for any big club, let alone Manchester United. The Canadian international is only 22 years old but with plenty of experience. Since joining Lille in 2020, as a replacement for Osimhen, David has been directly involved in 45 goals in 105 matches. In the Champions League, he has scored three in eight appearances. With a similar profile as Osimhen, the Lille striker is one of the most promising number nines in the world. 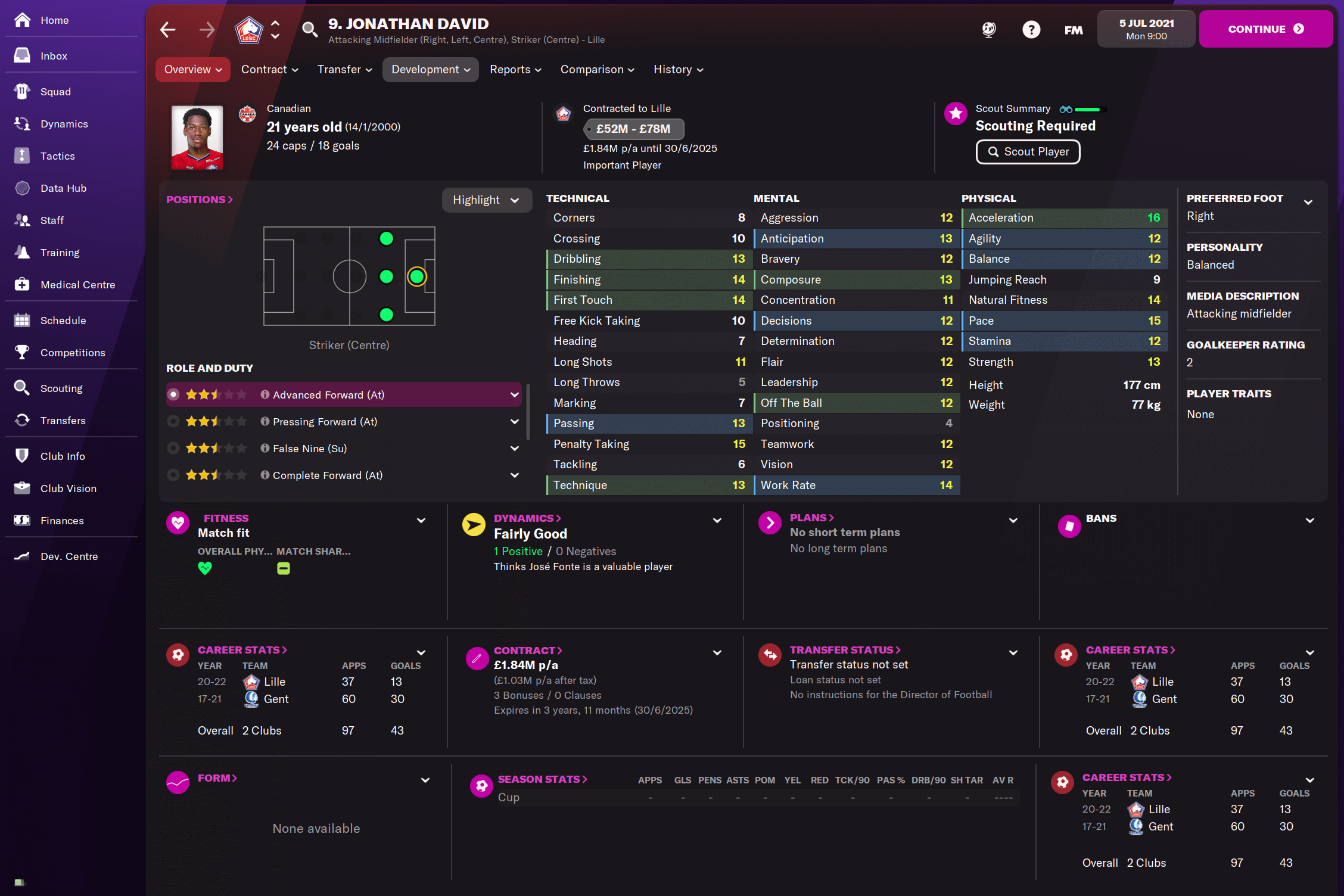 Off the top, David’s versatility quickly stands out. Although he is right-footed, he is able to play quite literally anywhere in the attack, being natural in all four positions. In addition to this versatility, the 22-year-old is able to effectively get involved in possession. Not only does he have the mental and tactical attributes to do this, but his 13 passing, 13 technique, 13 dribbling, and 14 first touch all prove he has the technical ability to do it as well. In addition to likely receiving a significant upgrade in FM23, the Canadian has plenty of time to further develop these attributes in the game.

While still young, Jonathan David is able to come in and get to work straight away. Nonetheless, he has time and room to grow, and as you develop this United squad into one of the best in the world, he will follow along.

While the previous two choices were relatively popular players, these next two players may fly under the radar. The first is Evanilson, a 23-year-old centre-forward at Porto. The Brazilian is starting to make a name for himself in the Portuguese league, with 0.50 goals per 90 this season. As many have done before, the former Fluminense forward is using Portugal as a stepping stone into European football. Still young, Evanilson may be a cheap yet very good alternative to the big wonderkids. 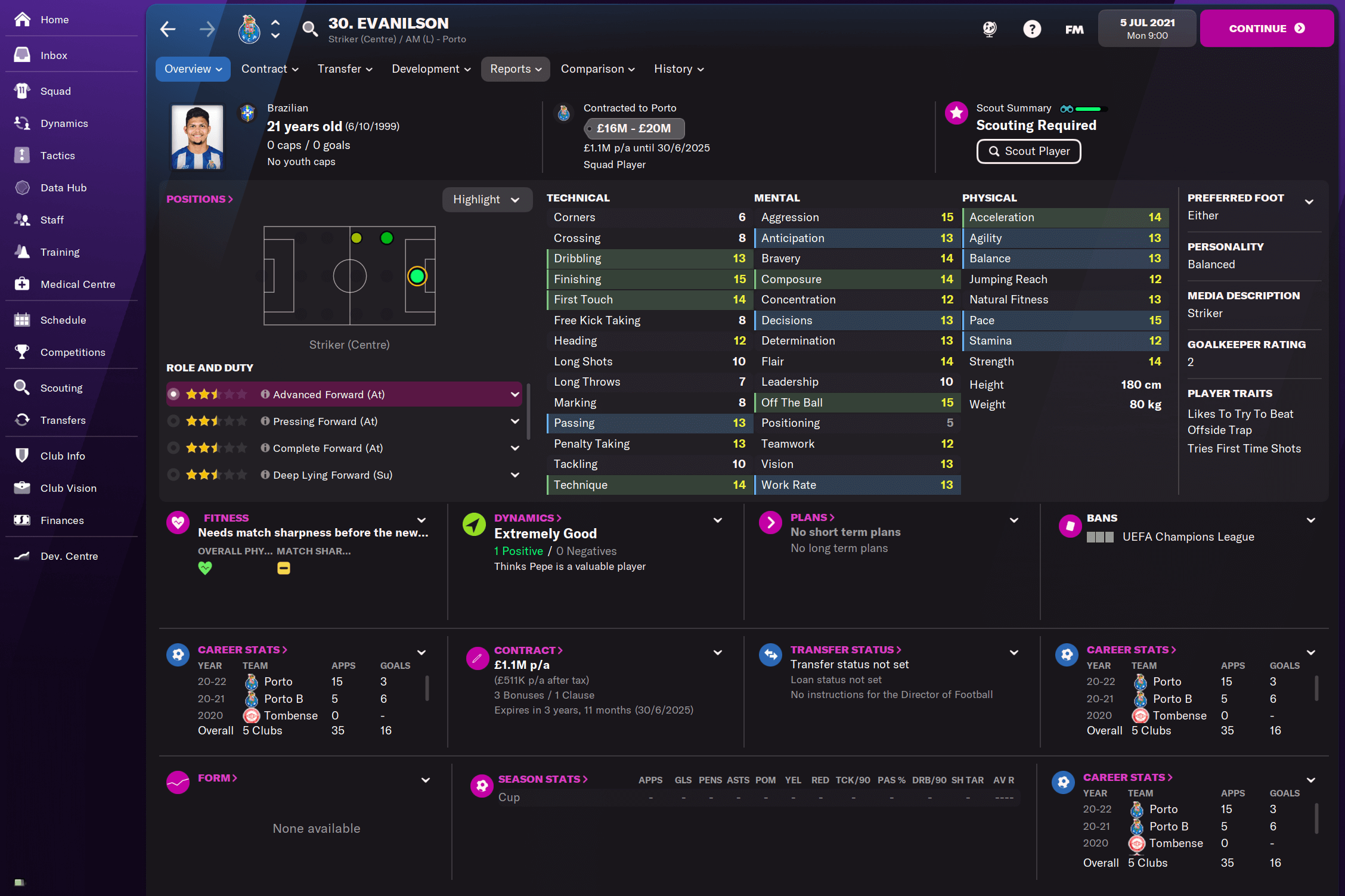 In FM22, Evanilson has extremely good attributes to start the game, and with another good season in the books, they will only improve in FM23. He is a powerful and pacey centre-forward, constantly looking to make runs in behind and finishing chances. The 23-year-old has 14 strength and 15 pace to round off an incredible physical profile. Technically, he is well-rounded with great finishing, dribbling, passing, and technique. Finally, every but two of his mental attributes are over 12. To finish off an outstanding profile, Evanilson is able to use either foot, an important tool for a centre-forward.

The Brazilian has perhaps one of the most underrated profiles in the game. For his ability, he is extremely cheap and could definitely be secured for less than £40M, if not much less. A hidden gem in European football, Evanilson could be the centre-piece to rebuild this United side around.

The next possible target is Fernando Niño, a product of Villareal’s youth academy. The 21-year-old, who will be 22 when the game is released, has been playing with Villareal B after not receiving many opportunities last season. Nonetheless, in FM22, Niño was one of the most promising players in the game. The 21-year-old has an incredible profile for such a young age and with a relatively low market value, he is a good yet very cheap option. 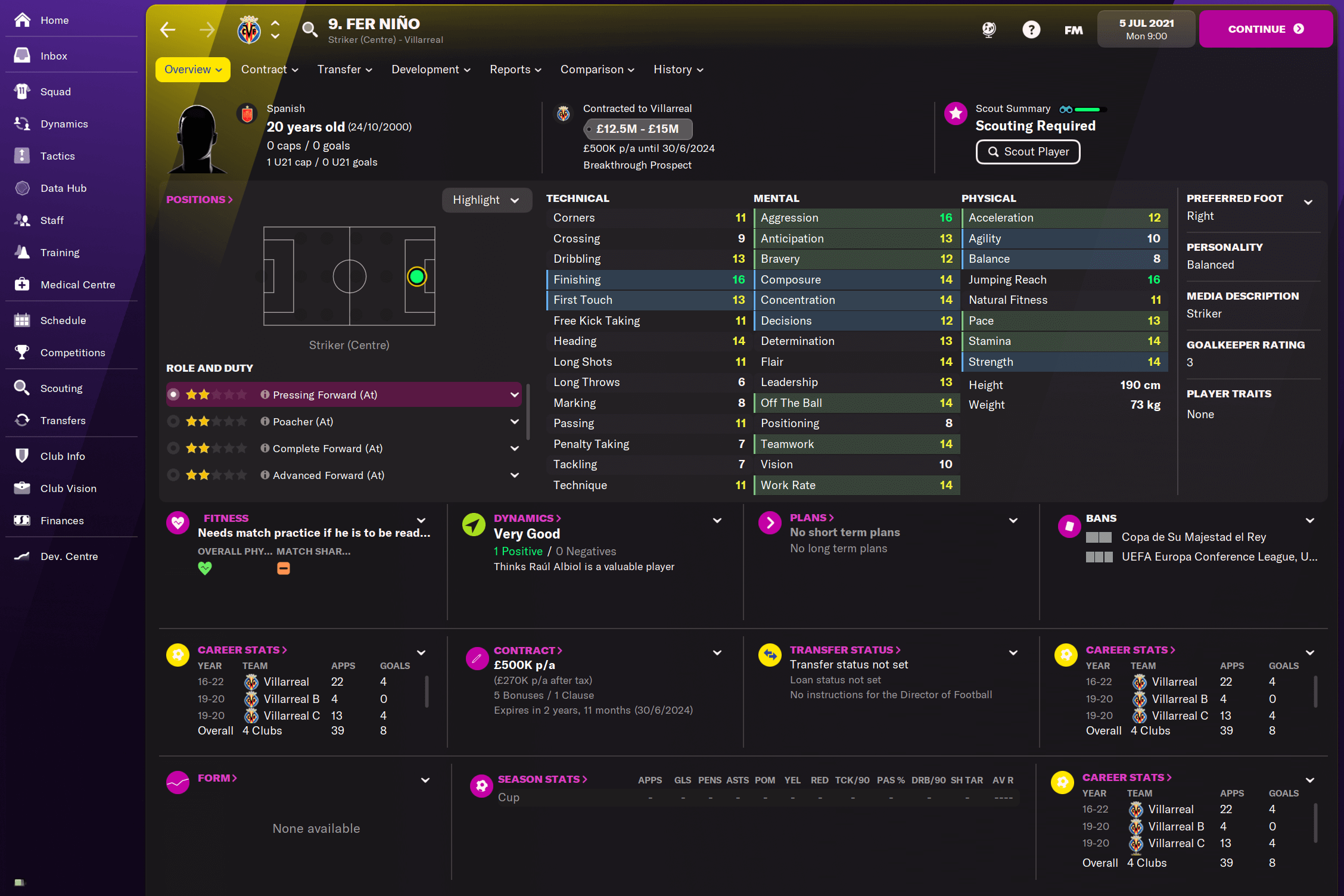 Fer is not as technical as the previous options and has a few raw areas to develop further. While his 16 finishing is very good, his 11 passing and technique are rather underwhelming. However, physically and mentally, the Spanish player has excellent attributes. Overall, Niño is a 190 cm target man with an incredible aerial threat. He is a rather specific type of striker, unlike the previous options. Rather than being plugged into any tactical system, the tactics must be rather considerate of him.

Fernando Niño is a much cheaper option than the rest, but he does not provide as much quality, at least not initially. Nonetheless, the Spanish centre-forward could be a low-risk high-reward alternative.

In addition to the four alternatives looked at above, there are some other honourable mentions worth looking at. The first is Gabriel Barbosa, also known as Gabigol. The Flamengo striker is most famous for his two late goals in the final of the Copa Libertadores to defeat River Plate 2-1. With a rather disappointing cameo in European football, the 26-year-old never quite entered the world stage. However, the former Santos player is still young with an incredible current ability. For a very low fee, Gabigol could come to Old Trafford and hit the ground running. 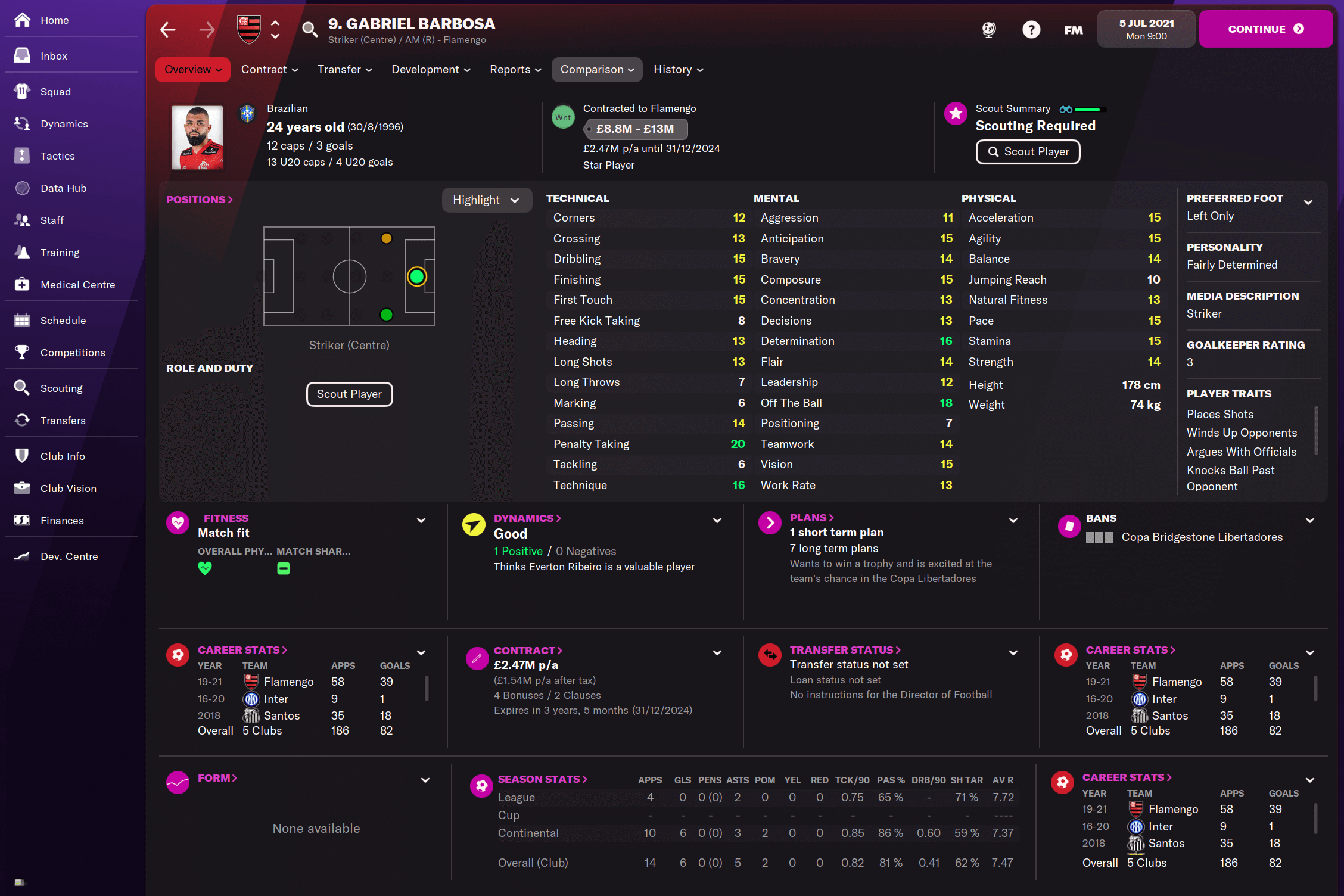 The final option is a rather obvious one. Ivan Toney is impressing this season at Brentford, with 8 direct goal involvements in 9 matches. While he could come for a much higher fee, being English and in the Premier League, he has already proven his quality in the Premier League. Toney would be a no-brainer option, with next to no risk. 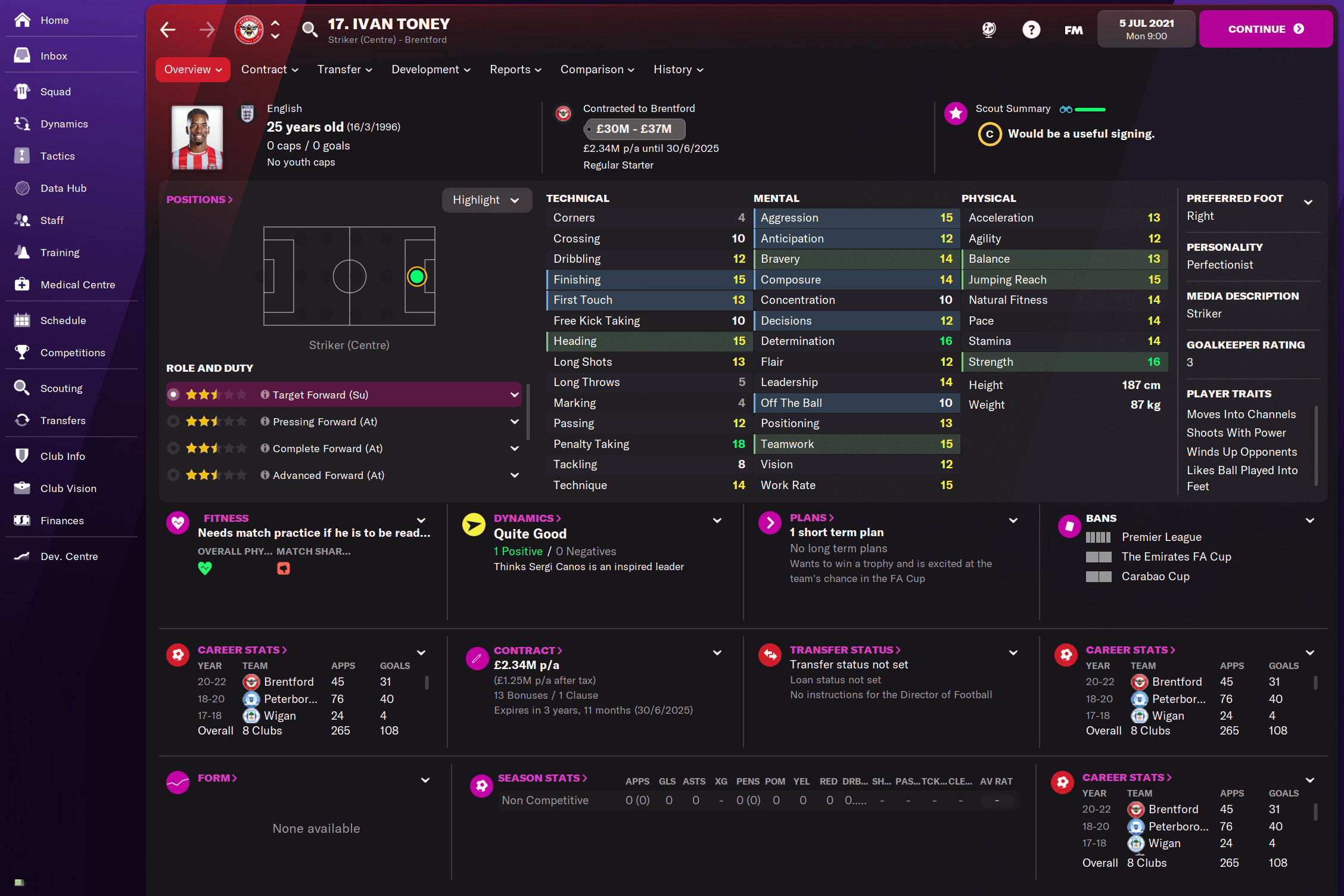 Manchester United are in desperate need of a number nine, and if you take over the Reds in FM23, that will be one of your main priorities in the beginning. There are numerous routes to take, and in this article, we have looked at six possible players to join Old Trafford. This is an incredibly important decision, as this player will be tasked with leading the Reds back to the elite of European football.

Pogba set for return next week

“I don’t care what anyone says” – Ighalo

Shaw has been performing well after moving to centre-back role from...