Manchester United is one of the clubs interested in RB Salzburg striker Benjamin Sesko. The Reds have been involved in a few transfer activities in recent weeks and have managed to sign Christian Eriksen and Lisandro Martinez. They have strengthened some of the positions and are still active in the transfer window, looking for some new faces in the attack and the midfield. Erik ten Hag has been a keen admirer of Ajax’s winger, Antony, and has been trying to sign him for the past two months. However, they were unable to please the Dutch club, and they are blocking his move. Ajax have already sold 4-5 key players from last season and cannot afford to lose more. This is the reason why the Red Devils have decided to go for Benjamin Šeško.

Šeško started his professional career by signing a contract with the Austrian club, RB Leipzig, in 2019. He spent two seasons on loan at FC Liefering. He broke into the first team last season and has since piqued the interest of several clubs. The 19-year-old Slovenian international has also represented his country in different age groups. He is a future talent and Manchester United are looking to secure him. Some of the stats from the UEFA Champions League last season show why a lot of clubs are after the youngster. 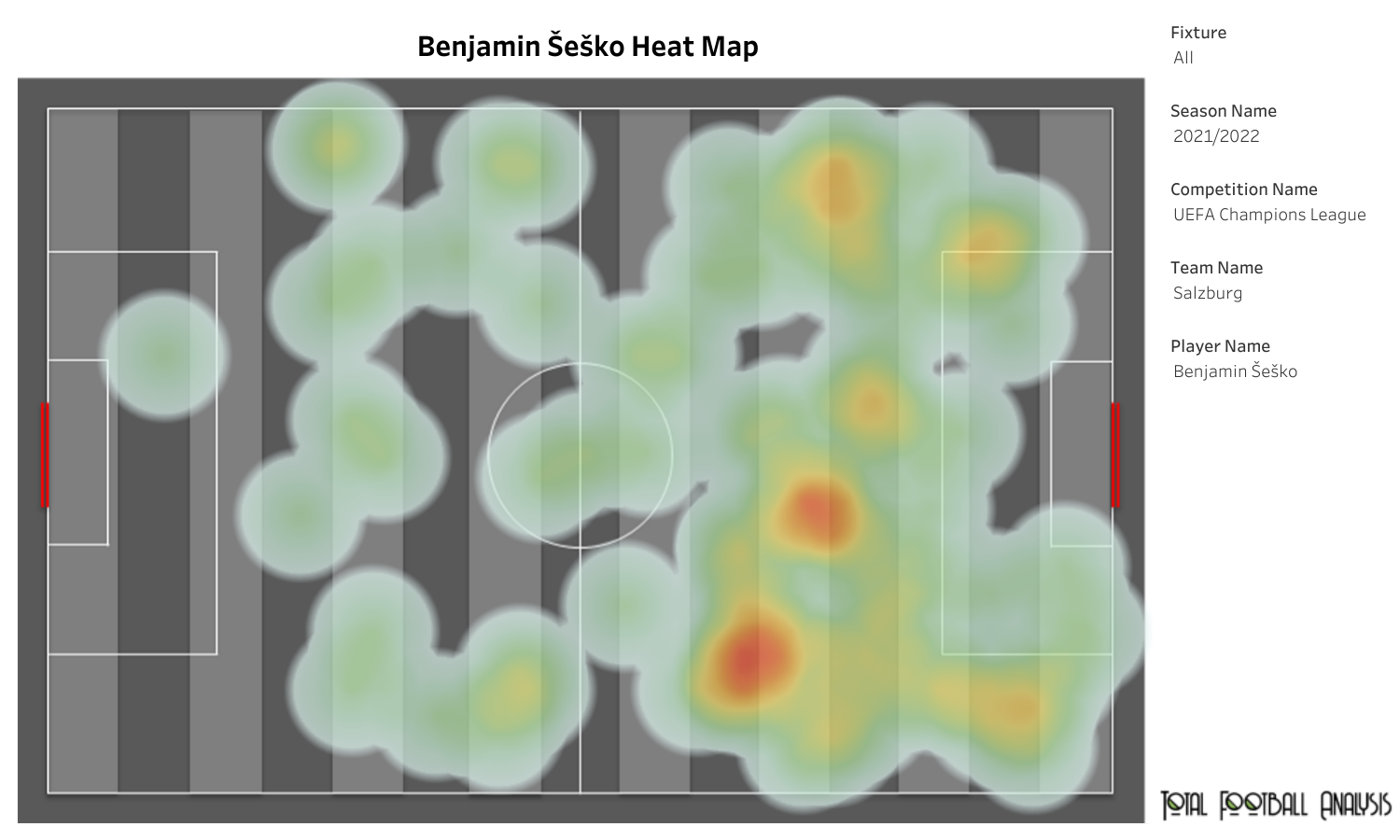 The 19-year-old played his first campaign in the UEFA Champions League last season. He appeared in eight matches for his side and started in four of them. The forward scored a goal and also provided an assist in the campaign. The above viz shows Šeško’s heat map from the UEFA Champions League. Salzburg played with two forwards, and Šeško featured as the right-sided striker. He found space inside the opposition’s penalty box on different occasions and averaged 3.56 touches per 90 minutes inside the box. The player likes to go wide and provide extra width to the attack. 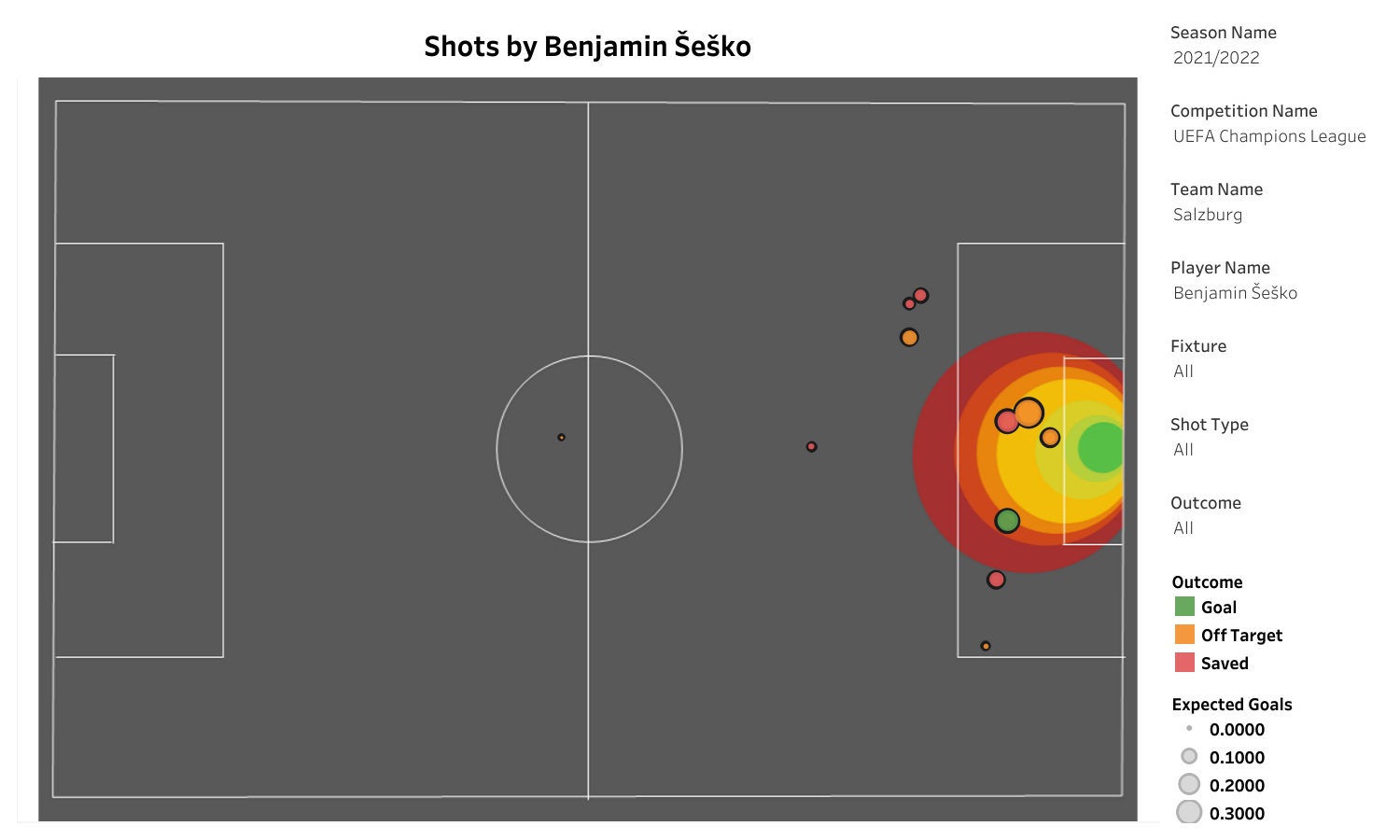 Šeško was involved in 5.8 attacking actions per 90 minutes and had a 57.7% success rate. The above viz shows Šeško’s shot map. He attempted 11 shots with a 36.36% shot accuracy. We can observe that Šeško can shoot from a long range. He is not shy of attempting shots from outside the opposition’s penalty box. 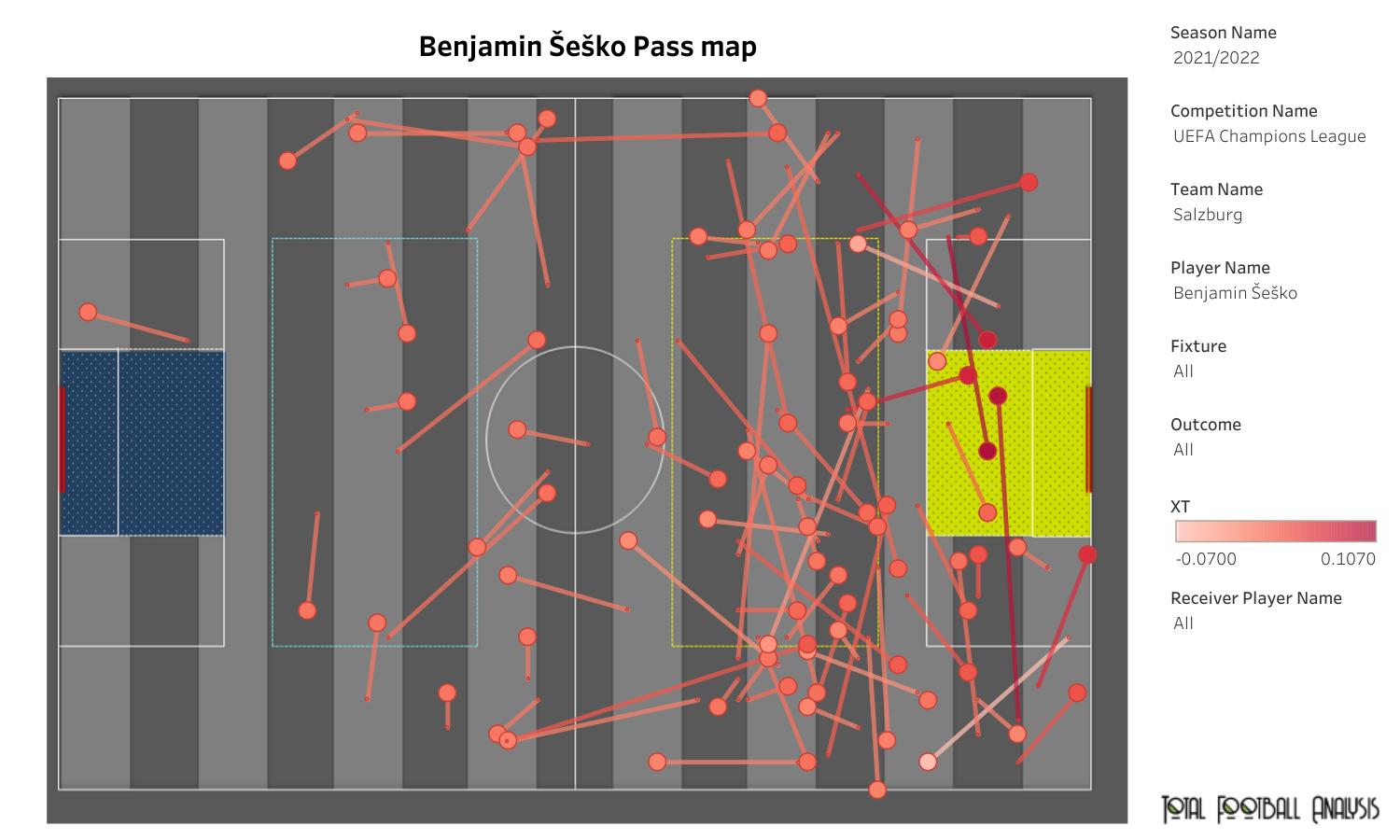 RB Salzburg is an attacking team, and that allowed Šeško to pass the ball into some dangerous areas. He averaged 18.7 passes per 90 minutes with a 73.8% passing accuracy rate. The above viz shows all the passes that the forward attempted. We can observe that he landed some of the passes inside the opposition’s penalty box.

Benjamin Šeško is still in his early days but is a very talented youngster. He could soon be on the move to some of the top European clubs. Manchester United will look to add him to their ranks as a future prospect, and he might lead their line in the future.