Manchester United are starting to find their touch under Erik ten Hag. They lost the opening two fixtures in the English Premier League and made a comeback by winning the next four matches. Their defence has played a key role in their success. However, the manager will be worried about the kind of form his strikers have shown. Marcus Rashford has scored goals, but the player has shown signs of inconsistency in recent seasons. Cristiano Ronaldo is finding it hard to make his mark on the team. He is also probably into the last few seasons of his illustrious career. The Red Devils need to find a replacement for the player.

The Red Devils were behind a few young strikers, and one of them was Dutch sensation Cody Gakpo. The 23-year-old has started from where he left off in the last season. The player is at the top of his game and is once again gaining the interest of Manchester United. He is once again scoring and providing goals at a high rate. We now look at some of the stats that show why Manchester United should once again try to sign the youngster. 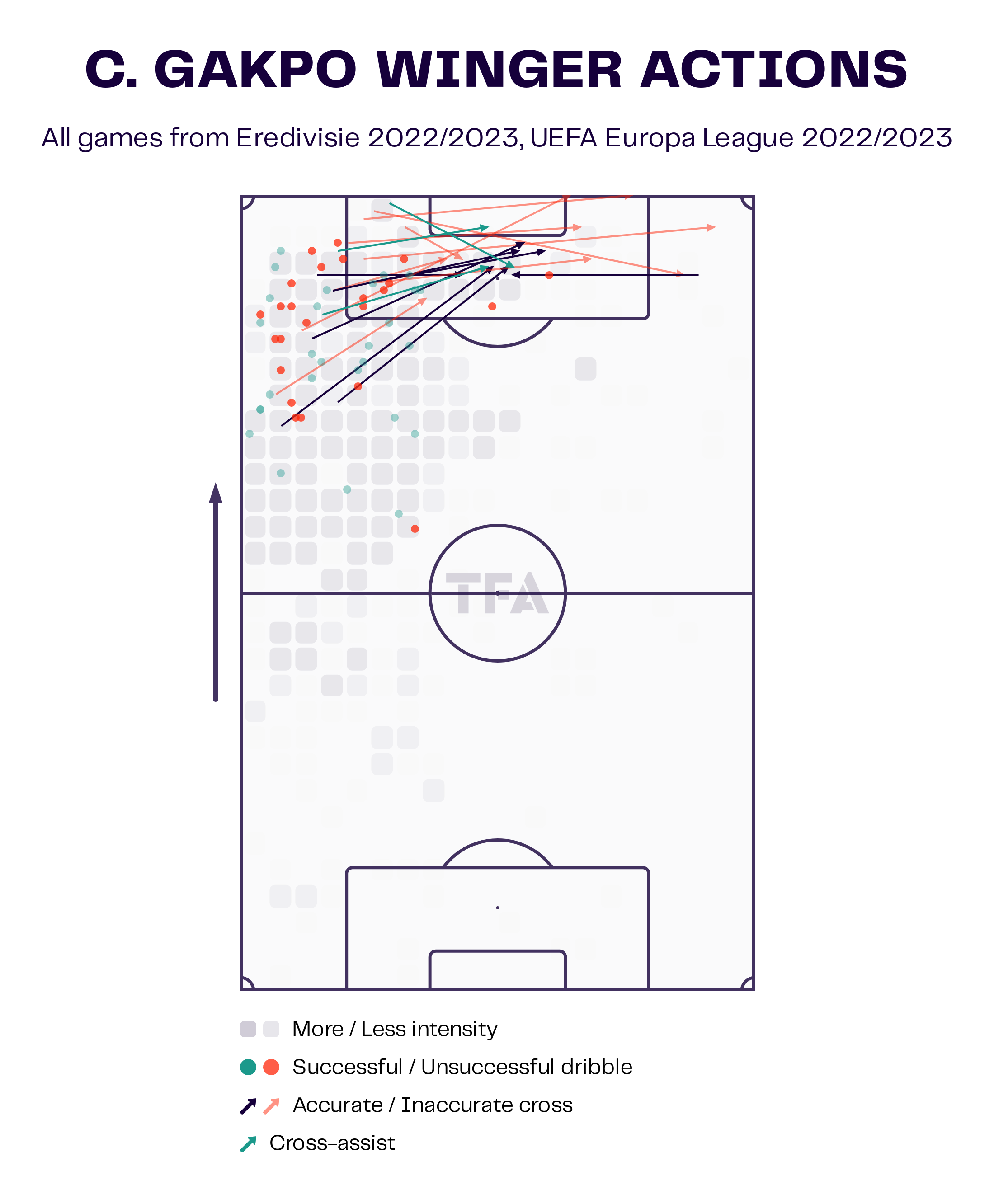 Cody Gakpo made 33 appearances combined in the Dutch Eredivisie and the UEFA Champions League. He went on to score 14 goals and provide 13 assists. This season, he is scoring at an even better rate and has nine goals in eight appearances combined in the league and the UEFA Europa League. The player also has six assists to his name. The above viz shows that Gakpo plays on the left side and is a regular supplier of crosses from that side. The Dutch international is also on set-piece duty, and that makes him a big asset to the team. He averages 3.27 crosses and 7.4 dribbles per 90 minutes. The accuracy rate is 43.5%, and Gakpo has completed 53.8% of his dribbles. 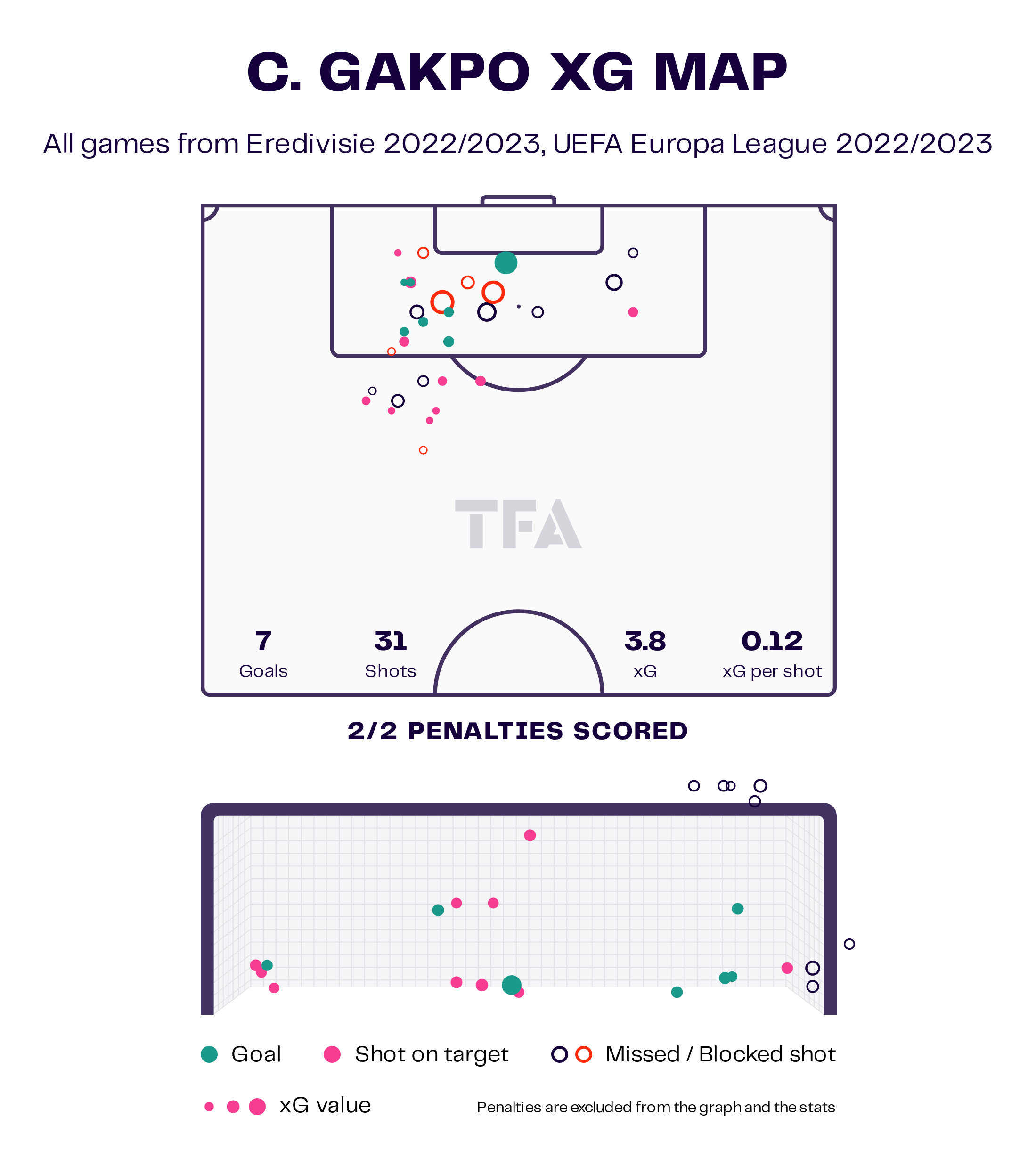 Cody Gakpo likes to cut inside like every winger and attempt shots towards the far corner. The player averages 4.7 shots per 90 minutes and has a high accuracy rate of 57.6%. Almost every shot has been attempted from the left side, and most of the goals are scored on the left side of the goalkeeper. Gakpo keeps the opposition defenders on their toes with his skills and ability to attempt shots from long range. 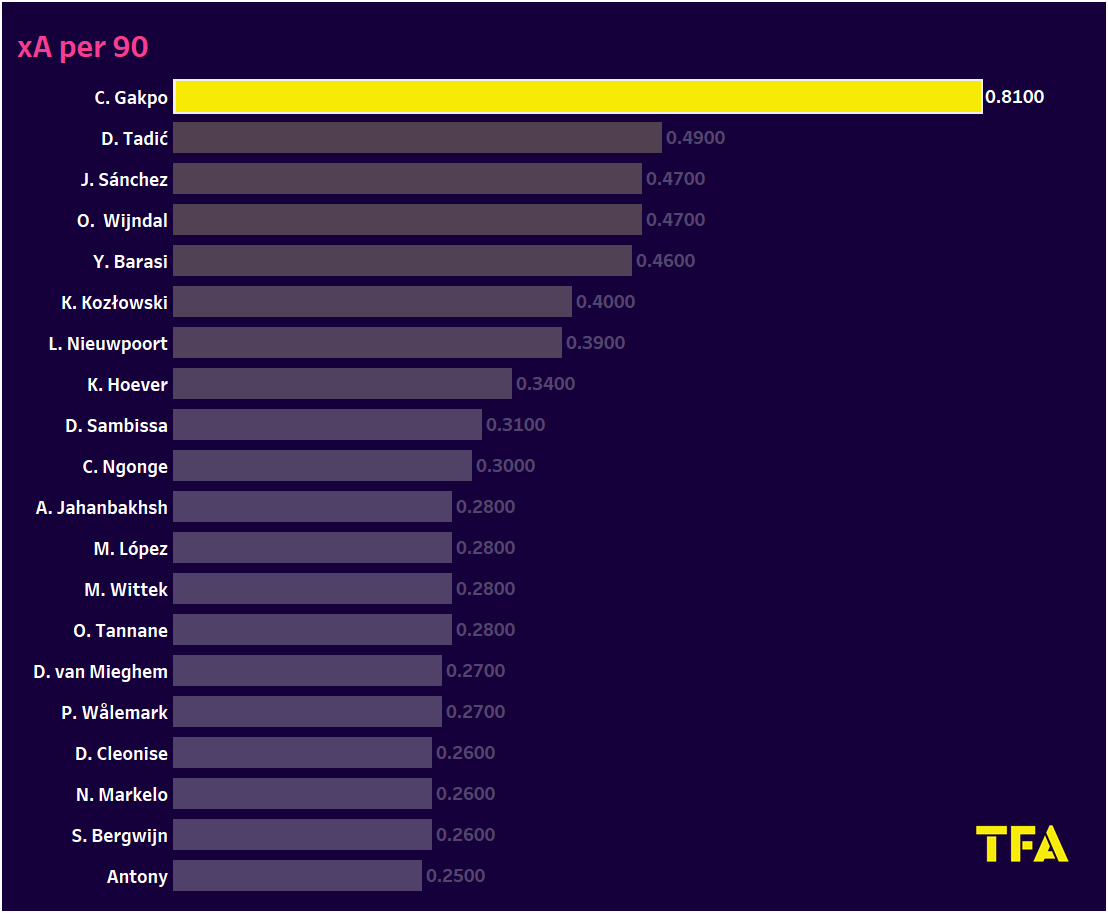 The 23-year-old has shown his creative side and has six assists to his name. The player averages 30.7 passes per 90 minutes with an accuracy rate of 76.4%. These include 3.4 passes to the final third and 3.98 passes to the penalty box. The above benchmarking shows that the player has the highest expected assist rate per 90 minutes in the league and is way ahead of the other players. 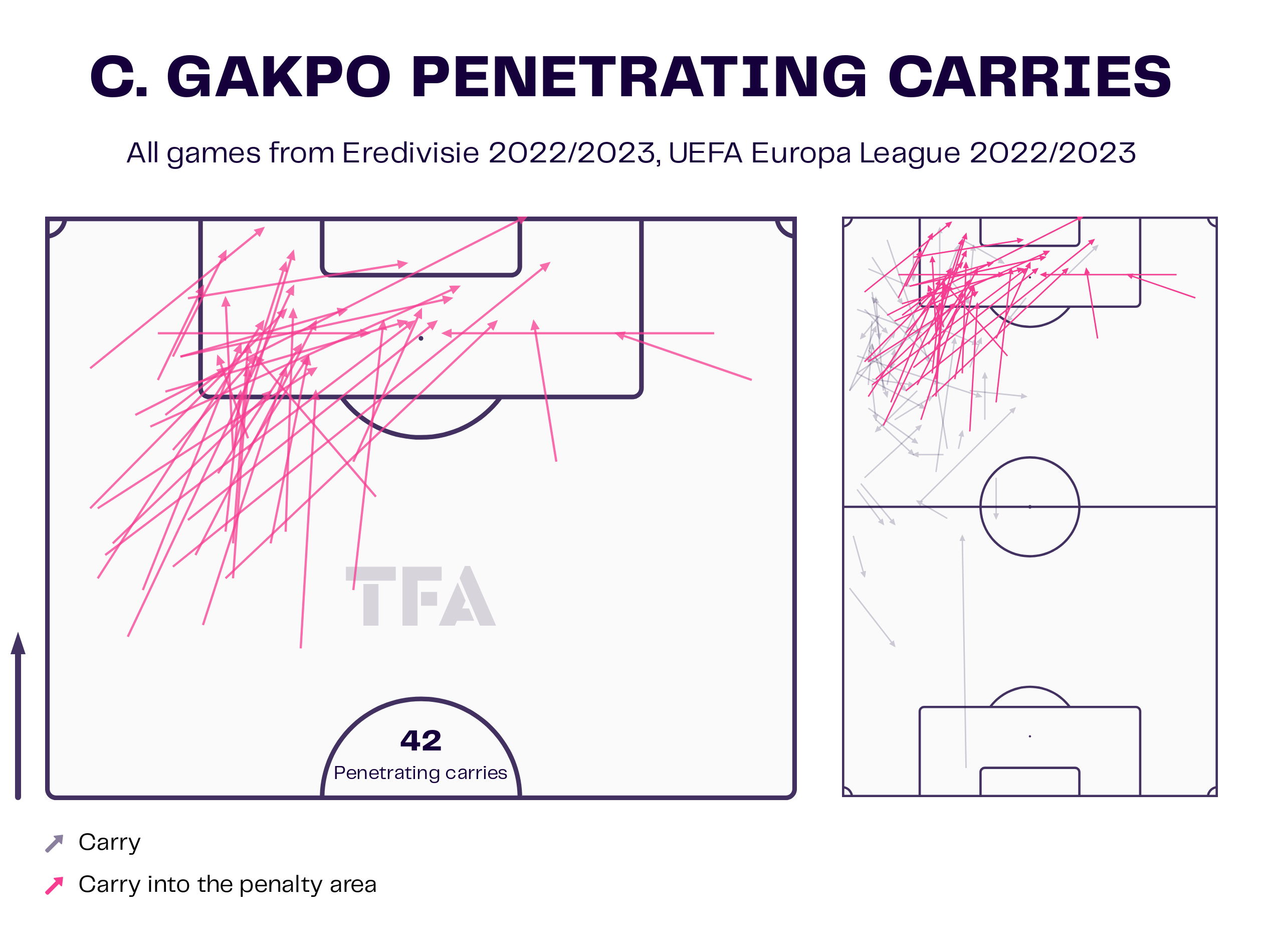 Cody Gakpo plays like a typical wide forward who likes to penetrate the opposition penalty box. The player has already carried the ball 42 times this season.

The Dutchman offers a lot of creativity on the field and can also score goals. Manchester United need a regular goal scorer and a playmaker in their team. Gakpo offers a lot to the team with his set-piece ability and the quality he possesses in other aspects of the game. Manchester United will be keen on acquiring his services before the other clubs do.

Under the microscope: Fred’s improvement in performance since Ole’s departure

Bruno Fernandes is quickly endearing himself to the United faithful

Rashford is United’s go-to for goals