Manchester United began the English Premier League 2022/23 season with two consecutive defeats. This created a lot of panic amongst the supporters as they were afraid of another managerial failure at Old Trafford. The Red Devils decided to spend money and grab one or two signings before the end of the transfer window. They were in need of a midfielder and made a surprising move for Real Madrid superstar Casemiro. The Brazilian agreed to a move to England. Having won the UEFA Champions League title five times and three league titles with Los Blancos, Casemiro brought a lot of experience to this Manchester United side. Everyone was happy to see such a big signing and hopes that Casemiro will bring some winning mentality with him. Casemiro grew a lot under the management of Zinedine Zidane. We now look at some of the stats of the player that show what he could bring to Manchester United’s midfield. 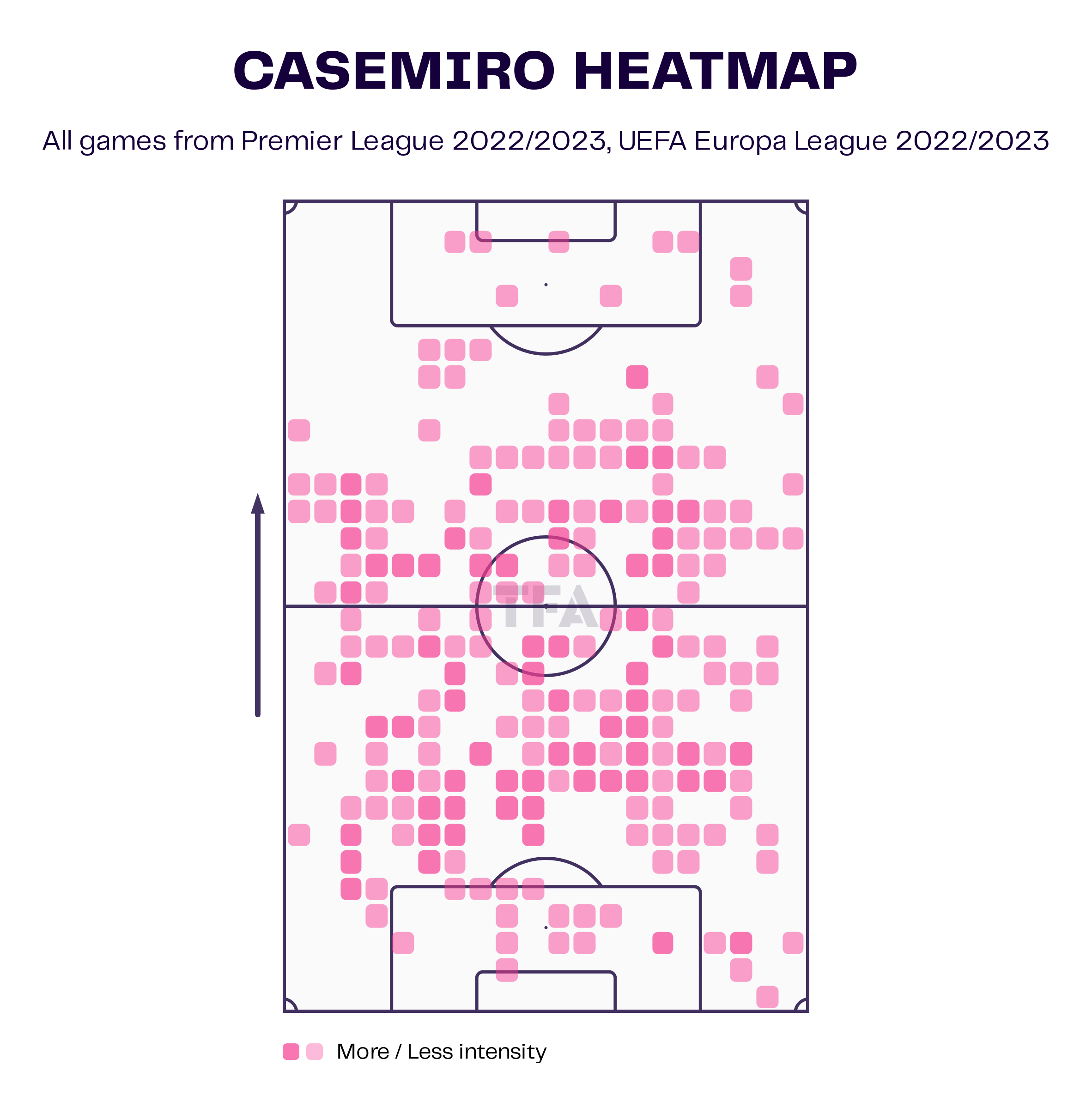 Casemiro plays as a defensive midfielder for the team. The Red Devils have been looking for a defensive midfielder for a very long time. They were unable to sign their targets in the summer and had to settle with the players they had got in the team. Casemiro has spent 208 minutes on the pitch for the Red Devils so far this season. He started in only one match and came off the bench in the other three appearances. A total of three appearances have been made in the English Premier League and two in the UEFA Europa League. This season, Casemiro has been more involved in the plays and is adjusting to the pace of the English Premier League. 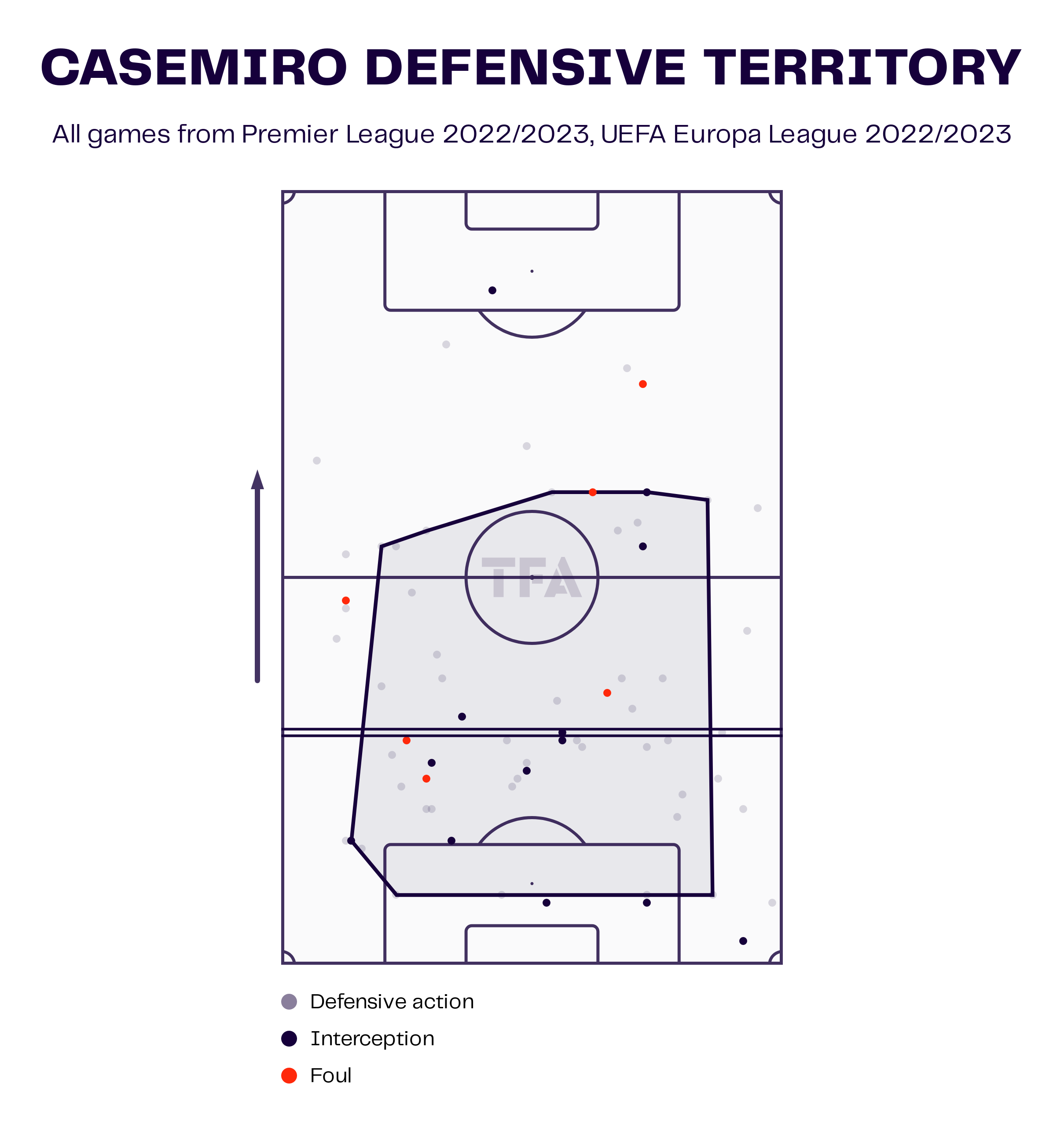 Casemiro provides defensive cover for the full-backs. He is a very calm and composed figure in the midfield and regains the ball for his team. The above viz shows the defensive territory of the player. Erik ten Hag had brought him in the last few minutes of most of the matches. Casemiro’s role is to help his side hold onto their lead and secure the three points safely. He has done so by contesting 25.5 duels per 90 minutes and making 8.65 interceptions. Last season, he averaged 21.1 duels and 6.5 interceptions. Manchester United will be happy to see the player put in his full effort to win the ball for his team. 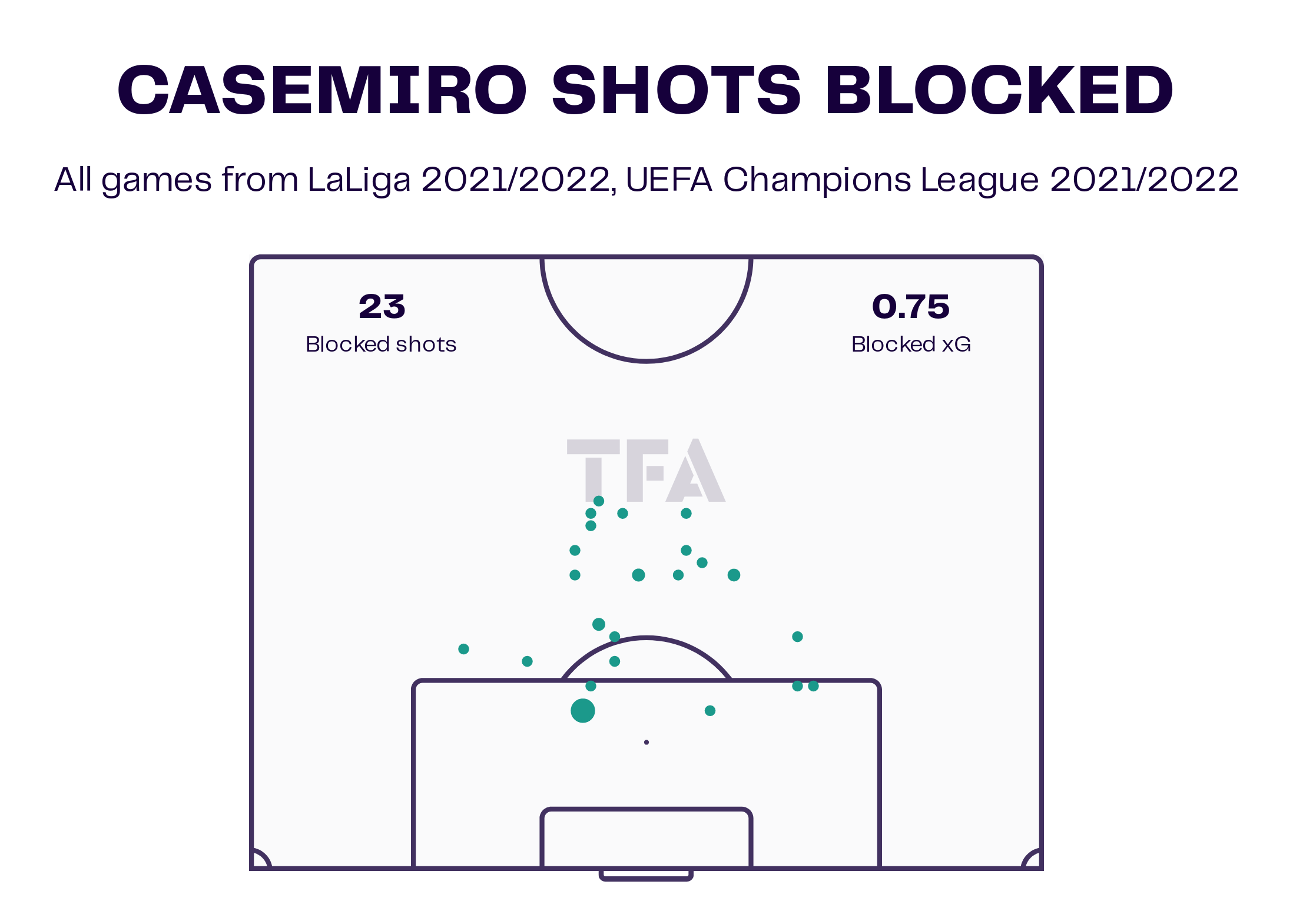 Another area where Casemiro will help his side is in blocking the shots attempted by the opposition. These days, players have improved their techniques and are not afraid of attempting shots from outside the penalty box. Casemiro’s role is to block these shots, and he did it 23 times last season. This shows that he can close down the attackers at a good pace and will be handy in a competition like the English Premier League.

Casemiro is still settling into the role. Erik ten Hag hasn’t put a lot of pressure on him and is giving him limited gametime. The player will look to become a regular soon and help his side win a long-awaited piece of silverware.

Under the microscope: Is Bruno Fernandes best-suited to play a deeper...

Transfer analysis: Why United must continue their pursuit of PSV star