Manchester United entered the new English Premier League season under new management. The Red Devils are looking to change the fortunes at Old Trafford after struggling to win the league since Sir Alex Ferguson’s retirement. However, things haven’t gone the way that Manchester United expected. They lost the first two games of the season and now sit at the bottom of the league table. They struggled a lot and were the second favourites to win in both these matches. Erik ten Hag is looking for some new recruits, and one of the players to have recently emerged as their target is Brighton & Hove Albion’s midfielder, Moisés Caicedo.

The 21-year-old made the switch to the Seagulls in February 2021. He got a bit of a taste of English football last season, and this season, he was promoted to the first team. The Ecuadorian started in the first two matches of the 2022/23 season, and one of those matches was against Manchester United. Let us have a look at some of the stats that show the player’s performances and how he could improve the midfield situation at Manchester United. 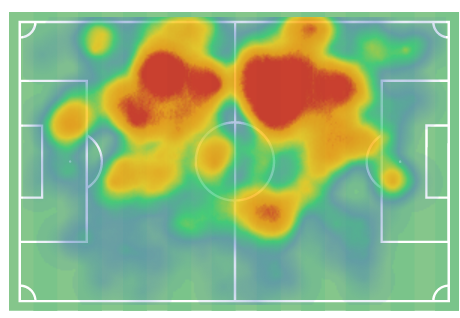 Caicedo is a box-to-box midfielder who has a high involvement in defensive actions. He represented Brighton in eight matches last season, and the above viz shows the heat map of the player. Caicedo played as a central midfielder on the left and all his appearances came in the last two months of the season. He was able to open his goalscoring account for the Seagulls and even provided an assist. Notably, the midfielder had a high passing accuracy rate of 87.7% and a high recovery rate of 10.3 per 90 minutes, with 53% of the recoveries made inside the opposition’s half. 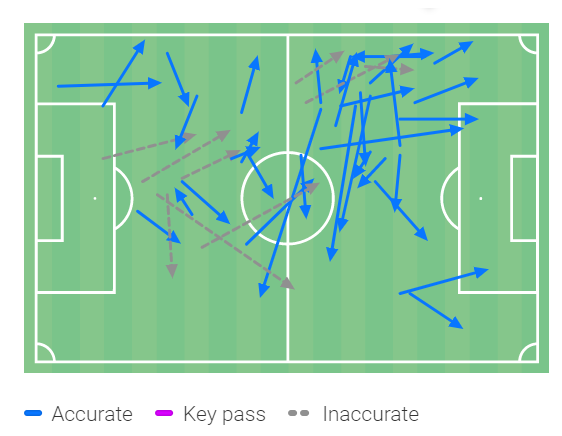 Caicedo averages 36.7 passes per game this season with an accuracy rate of 82.5%. The above viz shows the passing map of the midfielder in the last match against Newcastle United. Caicedo attempted 44 passes with an 80% passing accuracy rate. These included four passes to the final third with a 50% success rate and three passes to the penalty area with a 100% success rate. This shows that the player could be a great asset with the ball at his feet. 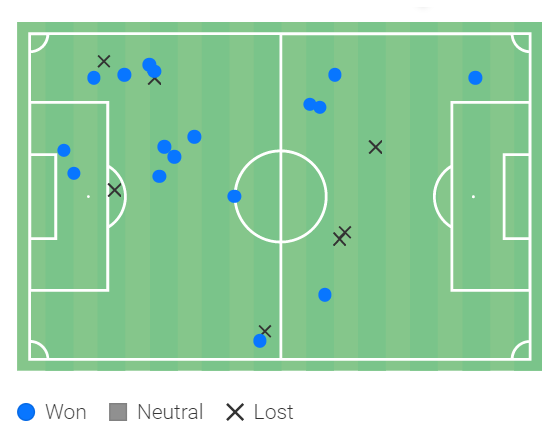 This season, the 21-year-old contested 38 duels with a 73.7% success rate. Caicedo’s other defensive contributions included nine interceptions and 26 recoveries, with eight inside the opposition’s half. The above viz shows the 24 defensive duels that were contested against Manchester United. He won 17 duels, with most of the wins coming in the defensive third. He was also strong in the air and won the three aerial duels he contested. One of the most impressive things about that match was the 16 recoveries that Caicedo made.

Manchester United need a midfielder who can win a tackle and recover the ball in dangerous areas. Caicedo is still young and at a developmental stage. His abilities on the pitch make him one of the top talents in modern football. Manchester United’s midfielders haven’t been able to show dominance in the middle of the park, and the manager might look to replace them before the end of the transfer window. The Red Devils are also on the rebuilding stage, and Moisés Caicedo could be a great addition to the squad.