Everton will play host to Manchester United in the English Premier League, with both teams in great need of a win from this game. Everton are struggling for points and are just above the relegation zone. Manchester United, on the other hand, have lowered their chances of UEFA Champions League qualification after playing a 1-1 draw against Leicester City.

Everton are on a poor run of form and just one point clear of the relegation spots in the league table. The Toffees suffered their seventh defeat in nine matches under Frank Lampard after Burnley came from 1-2 behind to seal a 3-2 victory in the last match. Everton have now lost 18 matches out of the 29 played and won just seven.

The two goals scored in the last match mean that Everton have now scored 32 goals with an xG rate of 35.59. Their defence conceded three goals, and overall, the Toffees have conceded 52 goals with an xGA rate of 42.28. In the last match, Everton attempted 16 shots, but only managed to hit the target three times. The above viz shows that Everton created threats towards the end of the first half and the start of the second half. They attempted more shots than their opponents in the last phase of the match but were unable to create many threats. 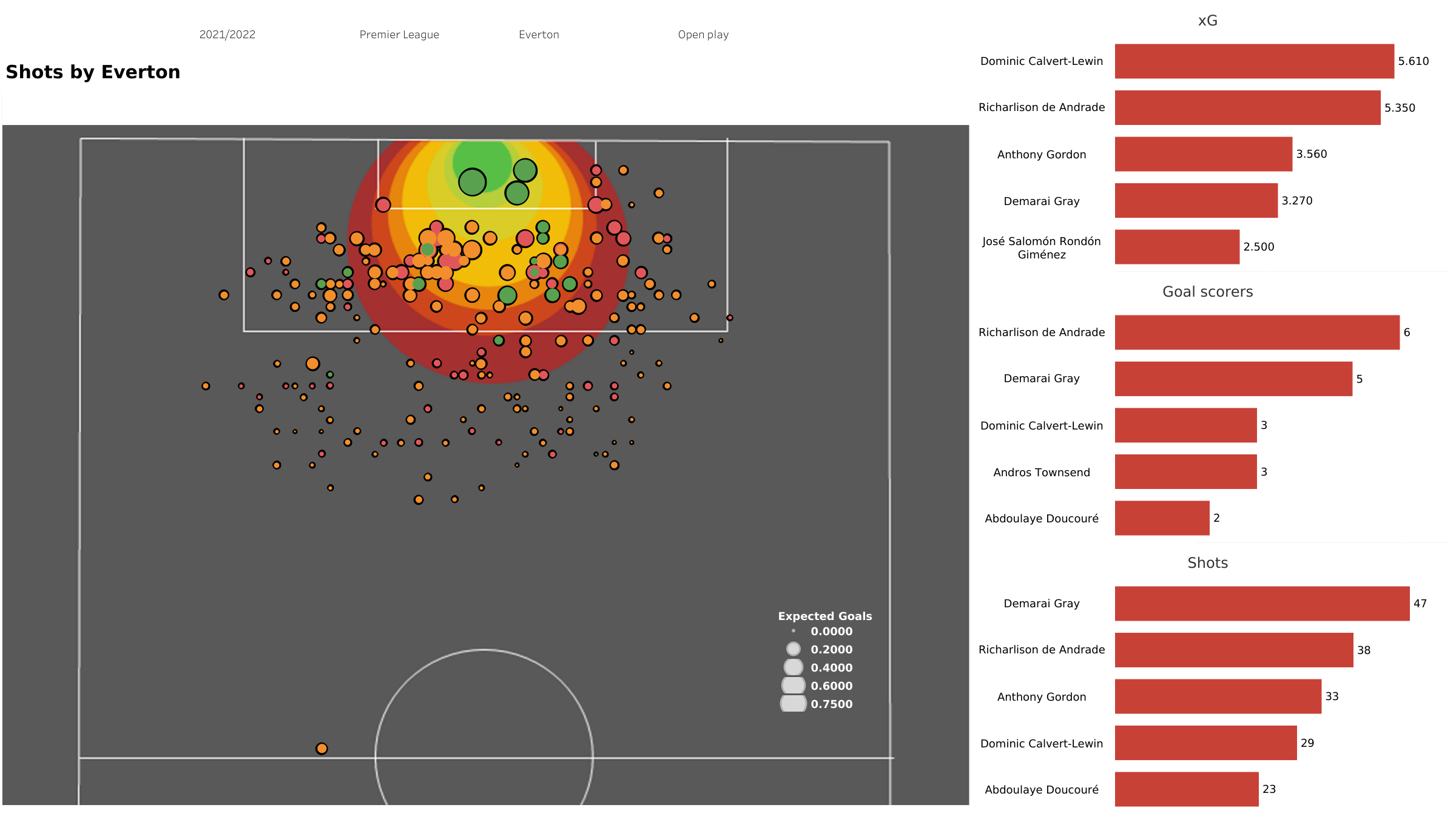 Everton have attempted 322 shots, with an average of 10.2 shots per 90 minutes. They have managed to hit the target 103 times, but have the third-lowest number of shots on target in the league. A total of 189 shots have been attempted from inside the opposition’s penalty box, with 70 on target. The above viz shows all the shots attempted in open play. Everton have managed to score three goals from inside the opposition’s six-yard box.

Everton are without Yerry Mina, Tom Davies, Andros Townsend, Andre Gomes, and Nathan Patterson. Donny van de Beek will also be a notable absentee as the Dutch international is ineligible to play against his parent club.

Manchester United’s 1-1 draw against Leicester City was their ninth draw this season. They have won 14 matches and lost seven. The Red Devils have managed to find the back of the net on 49 occasions with an xG rate of 45.67. In return, they have conceded 41 goals, with an xGA of 45.81. 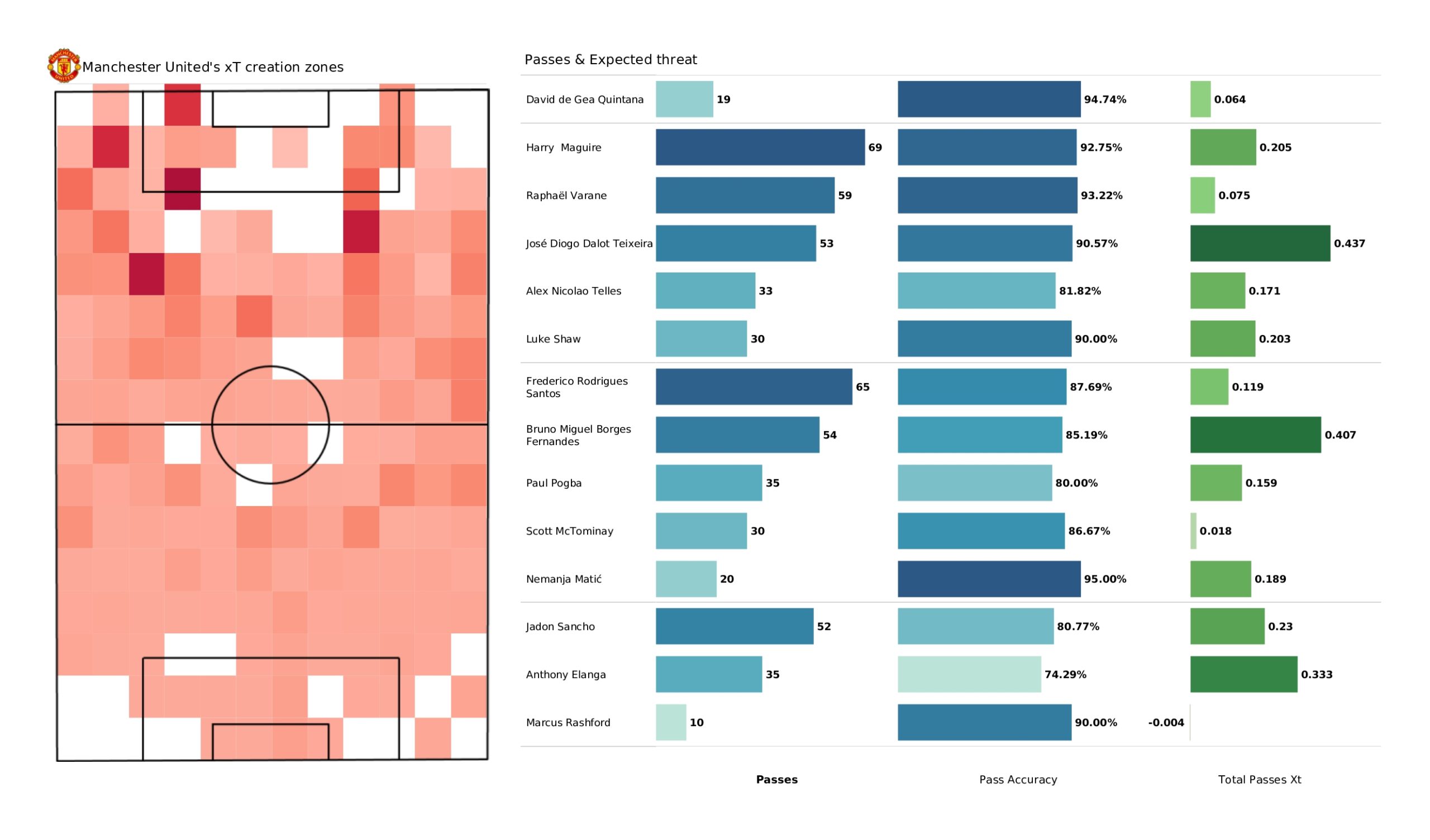 Ralph Rangnick’s men created 42 positional attacks, along with a single counterattack. They attempted nine shots and managed to hit the target four times. The threat creation zone in the above viz shows that Manchester United’s attacking zones are wide, and most of the attacks come from the left side. Right-back Diogo Dalot created the highest threats from passes for Manchester United in the match. 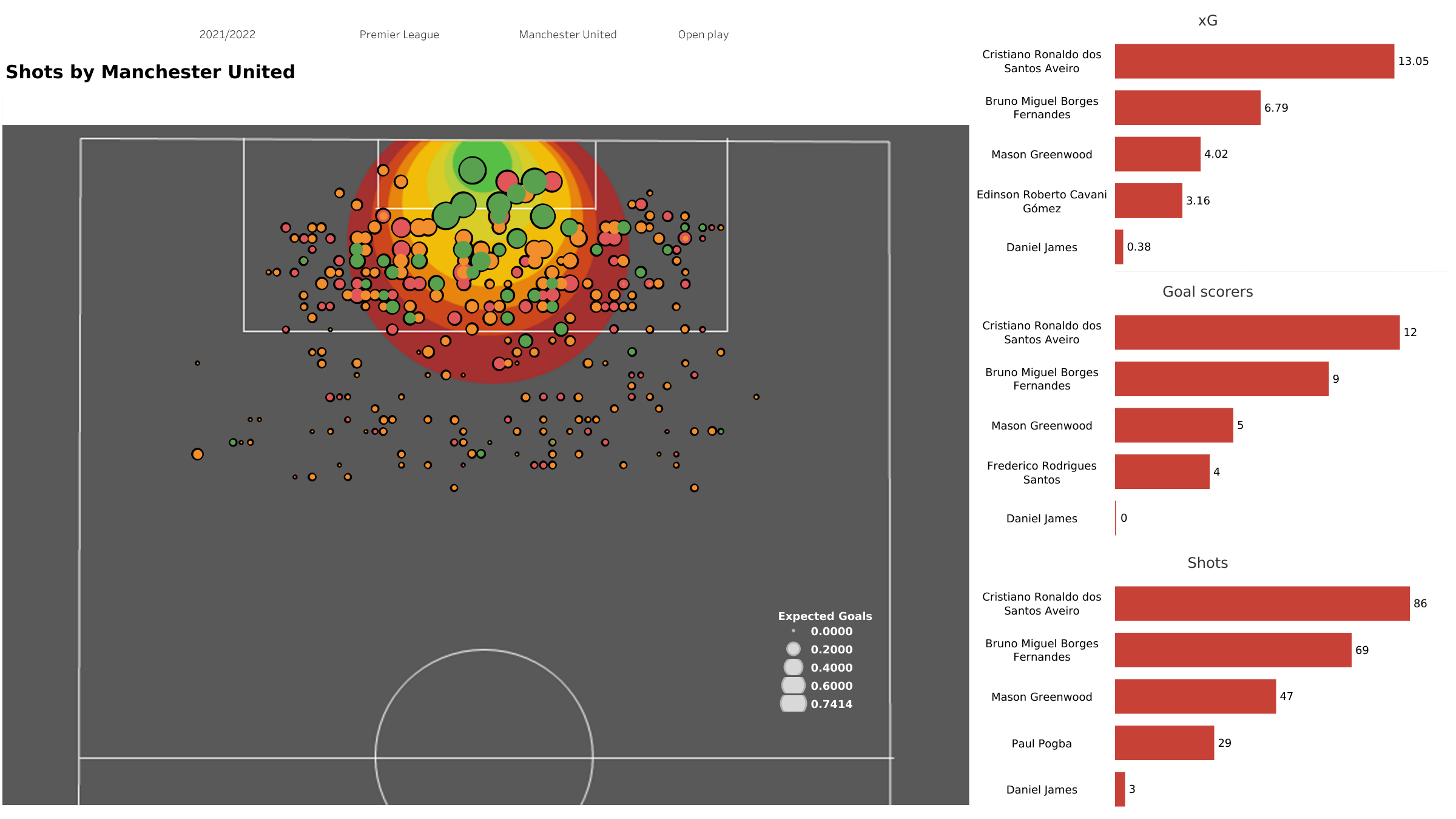 Manchester United have attempted 406 shots and have managed to hit the target 143 times. Ralph Rangnick’s men average more than 12 shots per 90 minutes. The visitors have scored most of their goals from open play and are more dangerous inside the box than their opponents. They have attempted 246 shots from inside the opposition’s penalty box, with 102 on target.

The Red Devils will be without Luke Shaw, Raphael Varane, and Scott McTominay for this game. Luke Shaw is expected to miss some of the upcoming fixtures to remove the metal bolts.

Both teams are in desperate need of three points, with Everton looking for safety and Manchester United looking for a top-four spot. The managers will go with their best XI in a clash between two of the biggest clubs in English football history.