Manchester United will host the English Premier League leaders, Arsenal, in their sixth match of the season. Both teams are on a good run of form, with Arsenal being the only team with a 100% win record in the league.

Manchester United won their last match 1-0 against Leicester City. After losing the first two games, the Red Devils have made a comeback by winning the next three. Erik ten Hag’s men have scored five goals with an xG rate of 1.38. Their defence has leaked seven goals, but these goals were scored in the first three games.

Arsenal continue to find ways of earning three points from their games and are on a five-match winning streak. Mikel Arteta’s men have scored 13 goals with an average xG rate of 2.32. His defence has conceded four goals.

Let us look at some of the stats of these teams from the previous match. 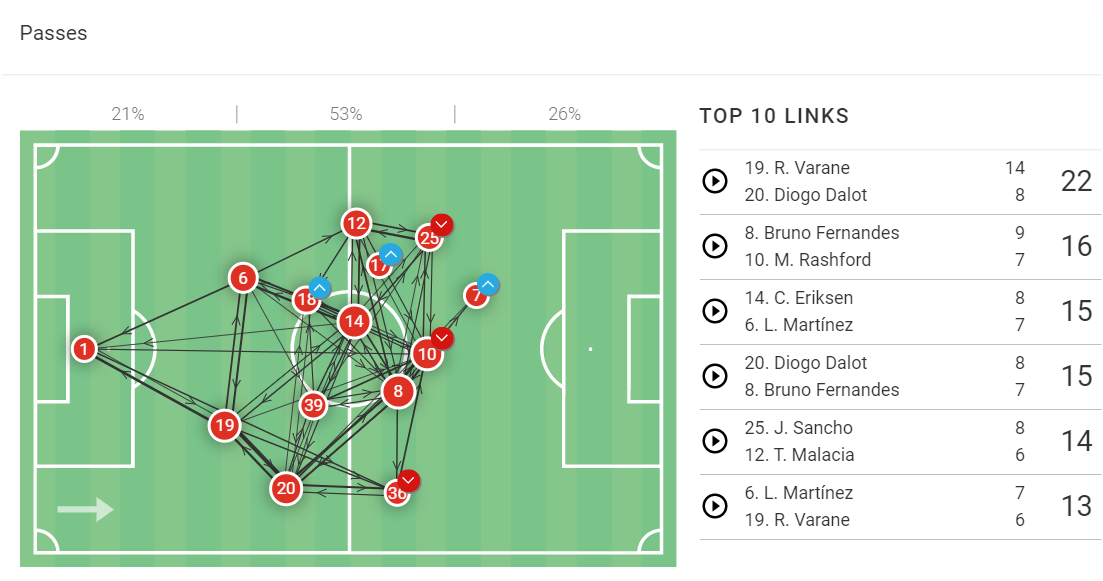 Both these teams start the match in a 4-2-3-1 formation. The above viz shows the passing links and average position of the players. It can be observed that Bruno Fernandes plays high up on the pitch and has a free role in the team. Christian Eriksen has been the main man in the midfield and controls the pace of the game. If Casemiro starts, then he will play a more advanced role. 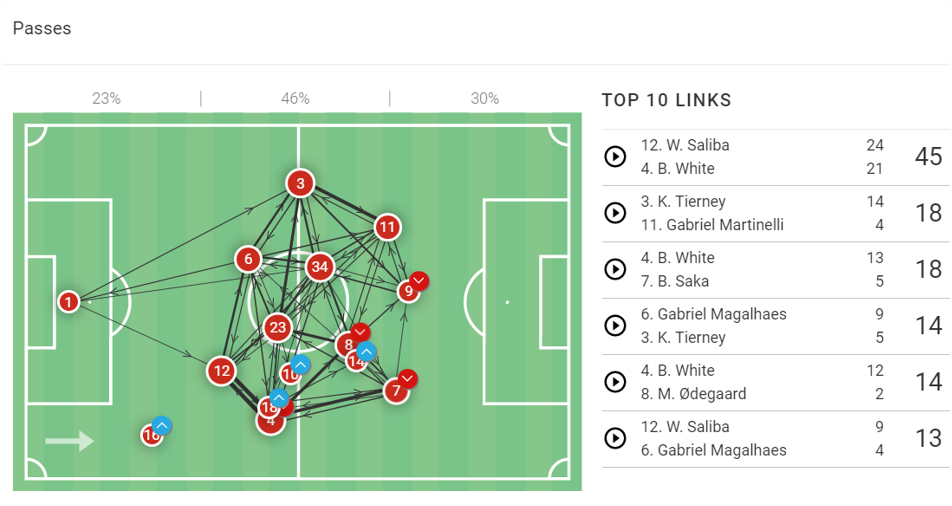 Arsenal have followed the same game style as last season. The average position of the players shows that Martin Ødegaard drifts to the right, and that allows Bukayo Saka to play further up on the pitch. Granit Xhaka plays a similar role to Eriksen, but he has a more defensive approach than the Danish player. Gabriel Jesus’ addition has been the greatest positive for Arsenal. 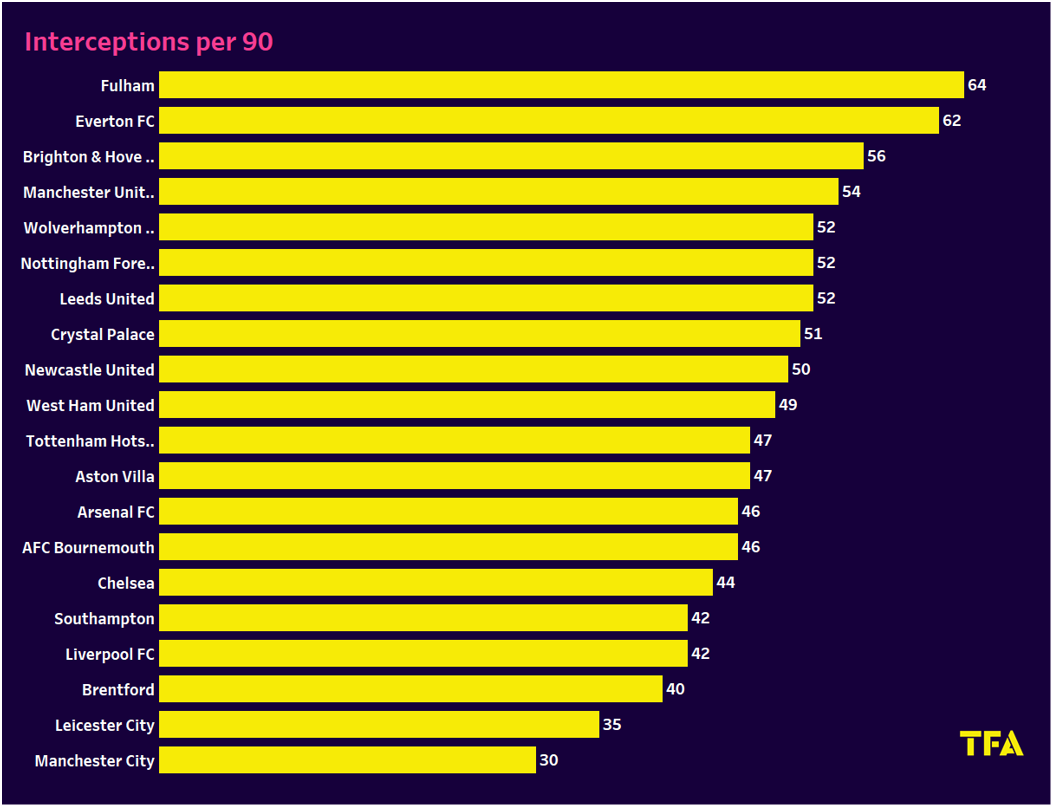 Manchester United have kept a clean sheet in the last two games and are settling into the defence. They have won 59.8% of defensive duels and 49.3% of aerial duels. The above viz shows that Manchester United have a high rate of interceptions. Their players have broken the opposition’s defence and will look to stop Arsenal from scoring goals. 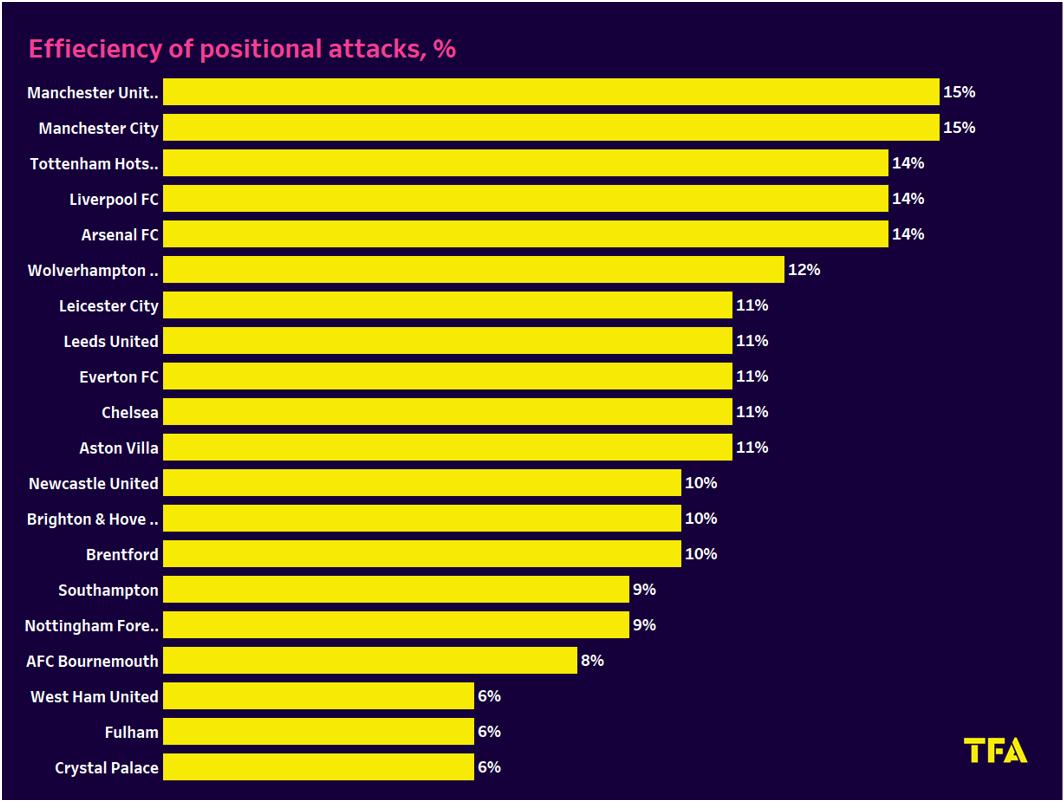 Arsenal average 30.6 positional attacks and 15.2 shots with a 40.8% shot accuracy rate. They have created more threats and will trouble Manchester United’s defence in this match.

Erik ten Hag might start with the same team that has won the previous three matches. However, the new additions, especially Casemiro, will be eager to make their first start for the Red Devils. He will be in contention to start the match and stop the Gunners from attacking. Antony might also get some minutes on the pitch.

Arsenal will still be without Oleksandr Zinchenko and Thomas Partey. Mikel Arteta has more concerns as he is still unsure about the participation of Aaron Ramsdale and Martin Ødegaard. They picked up a knock in the middle of the week and are still recovering from their minor injuries.

Both these teams are in-form and need three points to continue their momentum in the league. Arsenal lead the league table and cannot afford to lose points with Manchester City right behind them. Manchester United are also rising in the table and won’t let their rivals get away that easily. It will be an entertaining game when two of the biggest rivals in the English Premier League face each other on Sunday.

Man Utd legend has gone bonkers with his transfer suggestion