Manchester United will host Brighton & Hove Albion in the rescheduled fixture of Matchweek-18 of the English Premier League. Manchester United are on a poor run and have drawn their last two games, whereas their opponents are unbeaten in the last seven league games. The Red Devils played a 1-1 draw against Southampton at home and Brighton won their match against Watford by a scoreline of 2-0.

Manchester United sit fifth in the league table with 11 wins, seven draws, and six losses. The Red Devils have scored 38 goals and average 1.46 goals per 90 minutes. The overall xG rate of the team is 35.95. In return, they have conceded 32 goals, with an xGA of 37.09. The home team is just behind the top three in shots attempted towards the opposition goal. Manchester United players have attempted 330 shots, with 113 on target. 197 shots have been attempted from inside the opposition’s penalty box, and 78 of those have been on target. 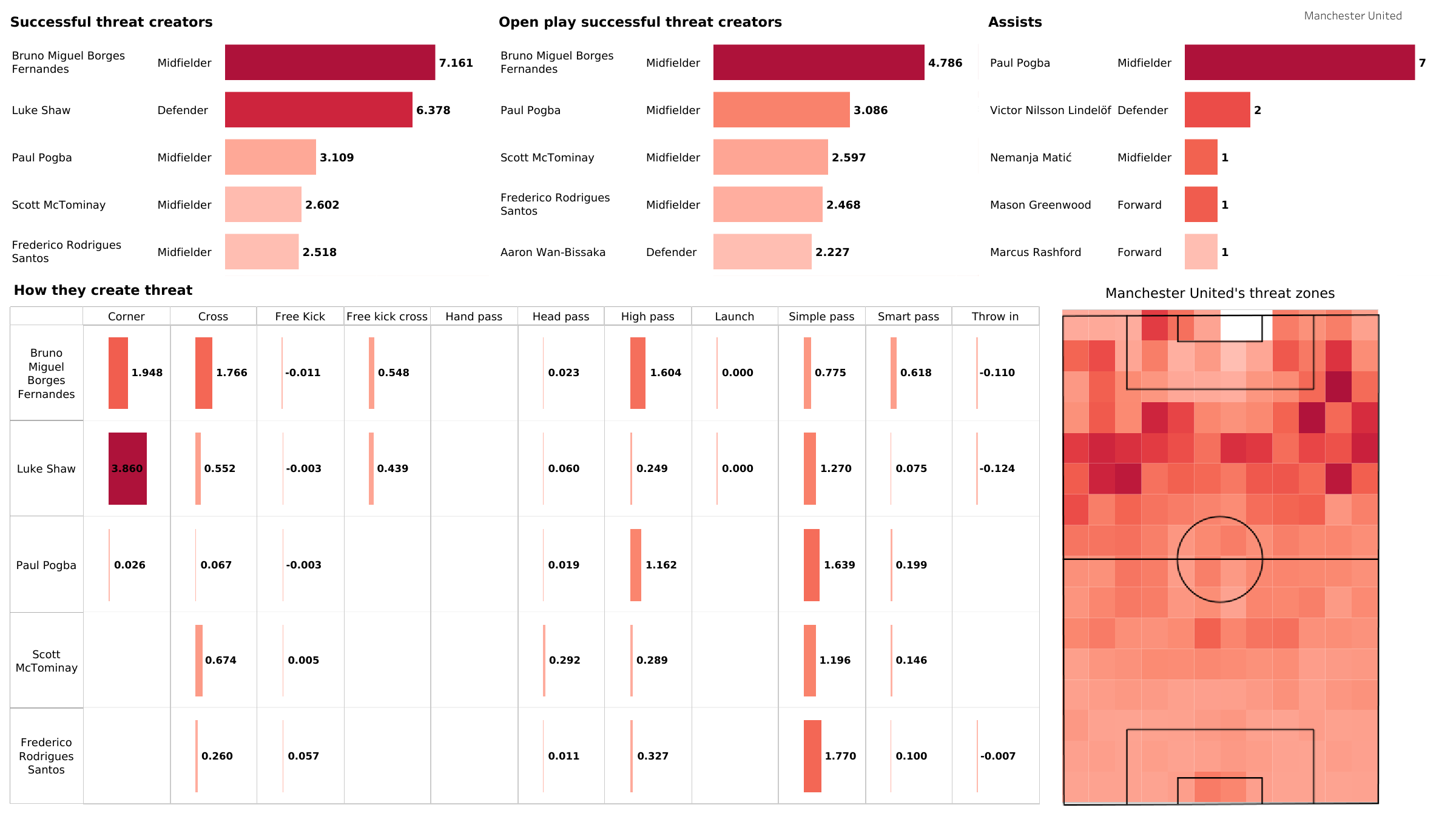 The above threat zone map shows all the threat creation zones for the home team. Manchester United players have created threats from the wider sides. Bruno Fernandes has created the highest threat for the Red Devils. He operates behind the striker and has started to drop into the midfield under Ralf Rangnick. Fernandes has created threats from corners, crosses, and high passes. He is behind Paul Pogba on five assists.

Fred has returned to the squad after testing negative for COVID-19. Alex Telles can also replace Luke Shaw in the left-back position. Jadon Sancho has been impressive in the last two games, and he will once again start on the left side. Cristiano Ronaldo hasn’t scored a goal in the last five league games, and he will try to get back on track.

Brighton have won seven, drawn 12, and lost four matches this season. Graham Potter’s men have scored 25 goals and conceded 23. The xG rate of the team is 32.35, and the xGA rate is 27.36. The above chart shows the positional attacks created by the teams. Brighton is ranked fourth in the league, and only Liverpool and Manchester City have a better positional attack per 90 minutes than Brighton. The Seagulls have attempted 280 shots, 95 of them on target. 155 shots have been attempted from inside the opposition’s penalty box, with 60 of them on target.

Enock Mwepu and Jeremy Sarmiento remain unavailable due to their respective injuries. Yves Bissouma should return to the starting XI along with Leandro Trossard. Neal Maupay is the highest goal-scorer for his side. The Frenchman has scored eight goals along with two assists.

This is a must-win game for the Red Devils as they have dropped points in recent games and have dropped down the league table. Brighton plays with a high tempo and can create a lot of threats towards the opposition’s goal. Ralf Rangnick’s men will need to convert more chances to take all three points.

Under the microscope: Fred’s improvement in performance since Ole’s departure

Ralf Rangnick reveals no one is safe at Man Utd and...