Jadon Sancho joined Manchester United from Borussia Dortmund last summer. The Englishman was brought in with a lot of expectations after showing dominance in the Bundesliga. However, things didn’t go the way that the team and the player expected. Jadon Sancho struggled to carry his form from the Bundesliga to the English Premier League and had a rather disappointing start to his Manchester United career. The 22-year-old made 38 appearances in all competitions and scored five goals along with three assists. Now the team is under new management and the player is also looking to perform better in his second season at the club. Eric ten Hag has preferred Sancho in his starting 11, and this means that the player is likely to play more matches this season. Now we look at some of the stats that give us a hint as to whether Sancho can revive his career at Manchester United. 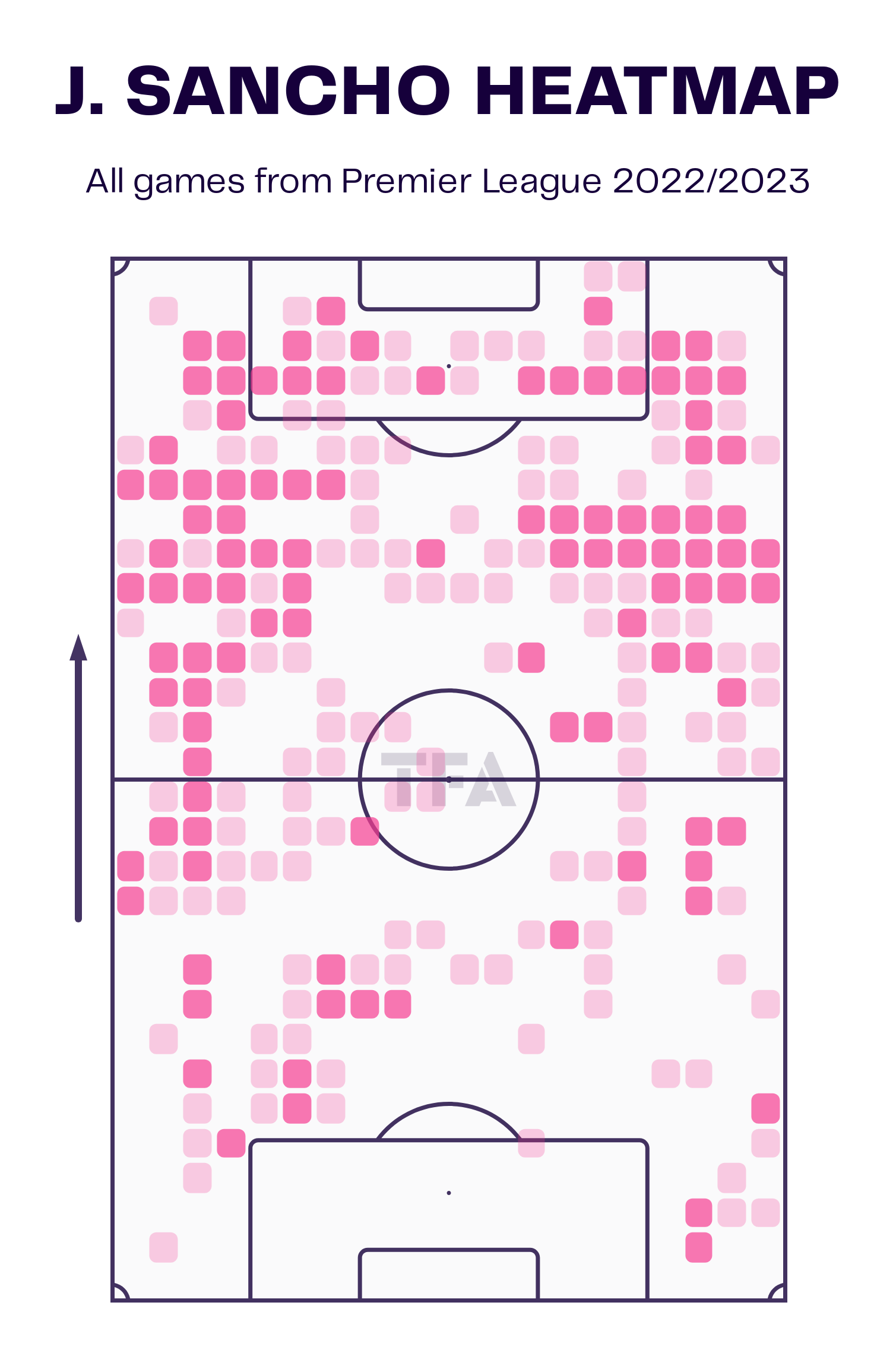 Jadon Sancho has started in all six English Premier League games for Manchester United under Erik ten Hag. The 22-year-old has already scored two goals, both being decisive goals. One of the goals was the winner in a 1-0 victory over Leicester City, and the other goal was the opening goal in a 2-1 win over Liverpool. Sancho has been very clinical with his finishing. He has attempted four shots and converted two opportunities. Erik ten Hag has used Jadon Sancho on both flanks. Last season, the winger was mostly used on the left wing. 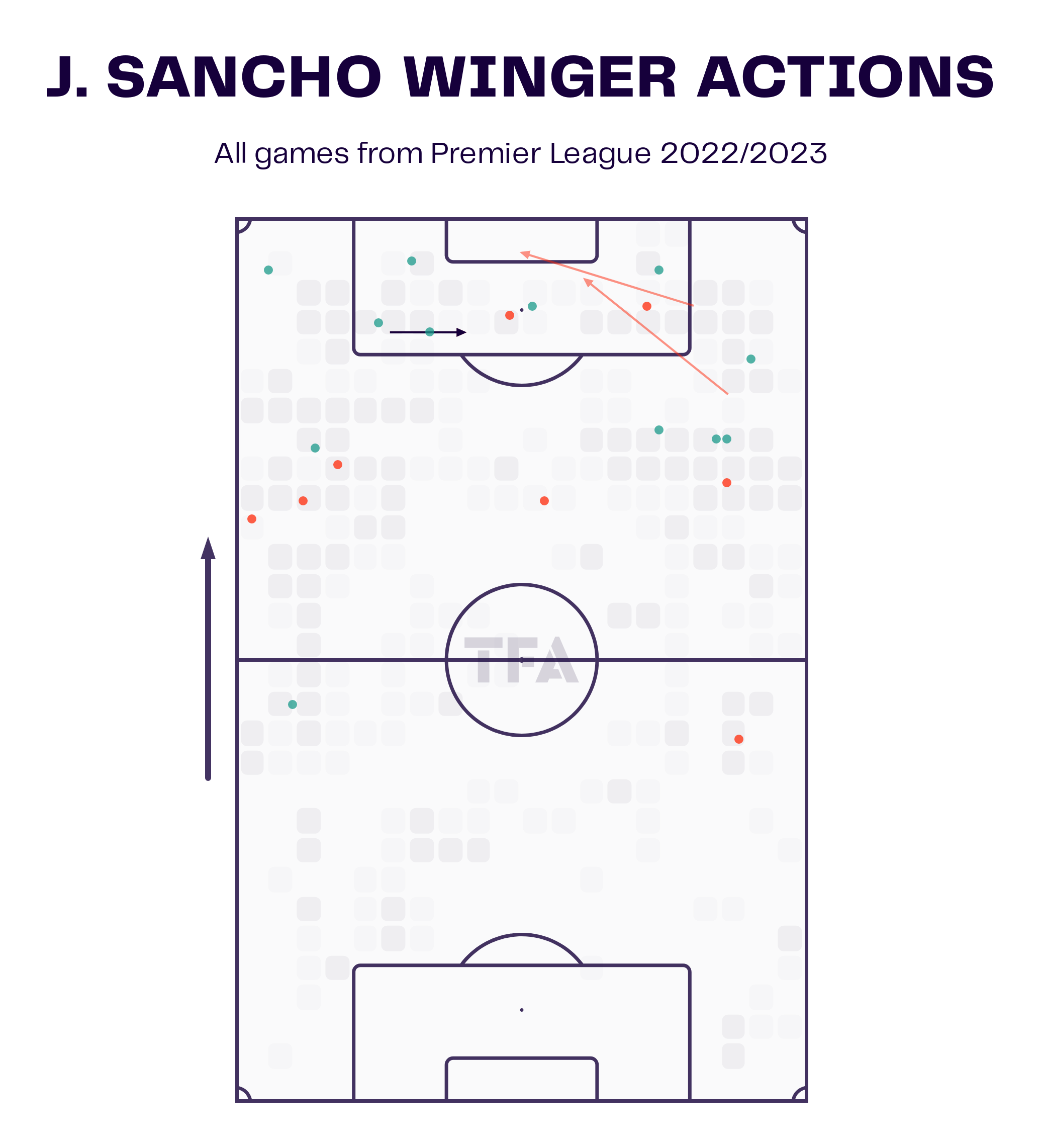 Jadon Sancho has the speed and skill that could make him the best player in the coming years. The winger likes to dribble past opponents to create chances for himself and his teammates. In the above viz, the green dots show the successful dribbles and the black arrows show the successful crosses. We can observe that Sancho has won most of the dribbles in the attacking third. This has allowed him to penetrate the opposition penalty box and create a threat towards the opposition goal. This is a huge positive for the player as this will boost his confidence going further into the season. 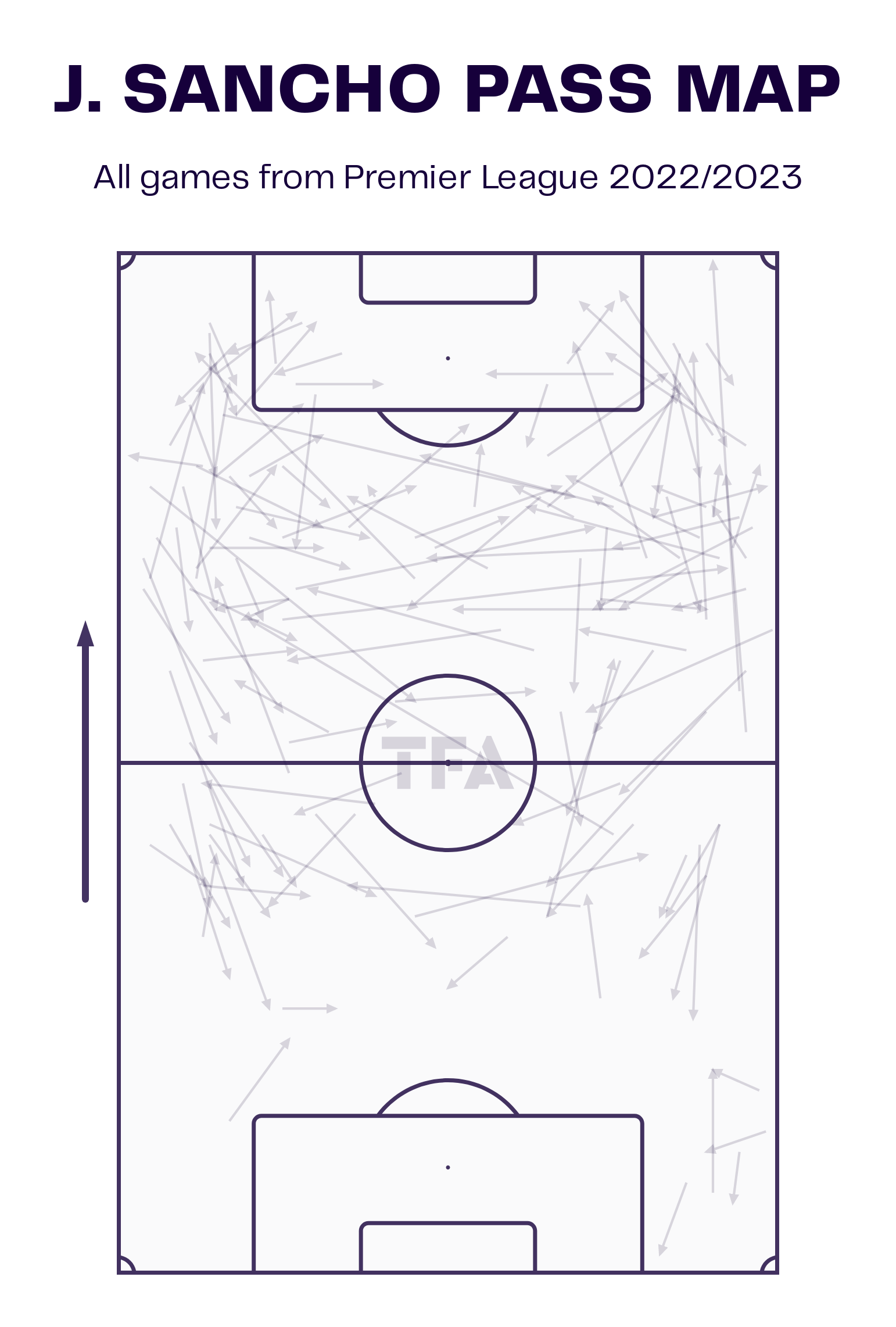 One of the areas where the player would like to improve is his passing. Jadon Sancho averages 33.6 passes per 90 minutes with an 84.5% passing accuracy rate. These include 2.5 passes to the penalty box. By looking at the above viz, we can observe that Sancho hasn’t provided fancy passes. Most of his passes have been short passes to find a teammate in the final third. Sancho hasn’t made full use of the penalty box this season and there have been a few setbacks for the player. He will look to revive his creative skills and provide more assists than last season.

Jadon Sancho has performed decently under Erik ten Hag and is slowly adapting to his tactics. He scored the opening goal against Sheriff in round two of the UEFA Europa League group stage and is leaving his mark on the European stage as well. The manager will be happy to see one of his top talents in form and will hope that he helps Manchester United to glory one day.

“I don’t care what anyone says” – Ighalo